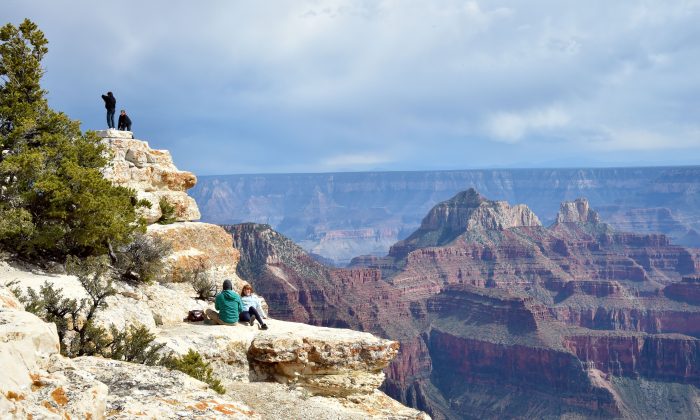 Tourists take photos from the North Rim of the Grand Canyon on May 18, 2015. (Mladen Antonov/AFP/Getty Images)
US

When one thinks of the Grand Canyon, “blizzard conditions” might not be the first thing that comes to mind.

But on Nov. 3, a great deal of snow was falling down at the Grand Canyon, which happens fairly often, as the average ranges from 2,000 to 8,000 feet above sea level.

The Grand Canyon National Park said “full blizzard conditions” are at the park.

With an elevation spanning from around 2000 feet to over 8000 feet (760-2440m), the Grand Canyon area experiences a variety of weather conditions. This weather variety includes cold winters and mild pleasant summers, moderate humidity, and considerable diurnal temperature changes at the higher elevations, with hot and drier summers at the bottom of the Grand Canyon along with cool damp winters. Summer thunderstorms and winter snowfall adds to the weather variety in this region.