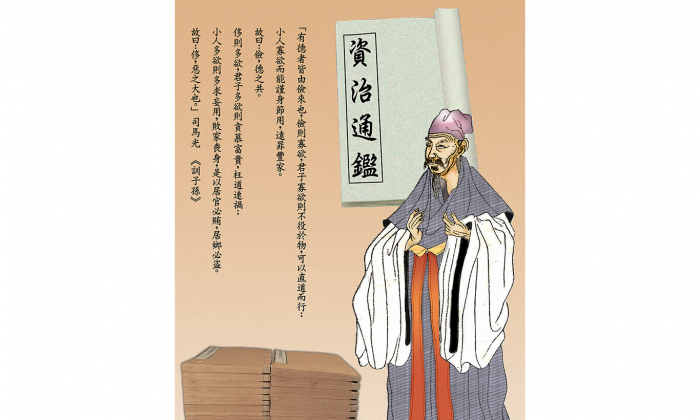 Sima Guang compiled the monumental historical chronicle “Zizhi Tongjian,” or the “Comprehensive Mirror to Aid in Government,” to serve as a reference for emperors in governing the country. (Zona Yeh/Epoch Times)
China

Grand Book of History a ‘Mirror’ for Chinese Emperors

Emperor Taizong of the Tang Dynasty (618–907) once asked his imperial historian Chu Suiliang, who kept meticulous records of Taizong’s words and deeds, whether he noted down even things that the emperor said or did that were not good.

“I would not dare not to record them,” Chu answered.

Chancellor Liu Ji added, “Even if Suiliang failed to record them, everyone else would.”

To this, Emperor Taizong replied, “True.”

This exchange was included in “Zizhi Tongjian,” a monumental book of history produced during the Northern Song Dynasty (960–1127) that explored wisdom for governing a country through moral lessons from previous dynasties.

The name of the 294-chapter text, which means “comprehensive mirror to aid in government,” speaks to the practical use of the book—to serve as a mirror that reflects both the good and the bad of the past in order to help future rulers avoid repeating the same mistakes.

It was work that particularly emphasized a truthful recording of history. Indeed, the loyalty of historians was demonstrated by their courage to keep honest accounts of everything the rulers said and did, good or bad.

Money is far less important than our reputation for honesty, which we cannot afford to lose.
— Sima Guang

Thus, since ancient times, the Chinese people have had faith in history and have used historical events to help evaluate the present and extrapolate principles to apply to current circumstances.

Among China’s vast body of historical works, “Zizhi Tongjian” is one of the country’s greatest books of imperial history. The chronological account covers a span of 1,362 years across some 16 dynasties, from 403 B.C. to A.D. 959.

It was compiled by prime minister and historian Sima Guang (1019–1086), who set out to highlight specific historical examples and to offer comments to convey Confucian principles in the hope that his own monarch and later rulers would reign with benevolence and refrain from evil.

‘Enlightened Rulers Will Have Honest Ministers’

One example is Sima Guang’s comment on an account in “Zizhi Tongjian” about the reign of Emperor Taizong during a time when many officials were taking bribes.

Troubled by this, Taizong secretly ordered that some officials be tested for their integrity.

When one official accepted a bribe of a roll of silk, Taizong wanted to execute him, but Minister Pei Ju intervened.

“Your Majesty used deceit to entrap this man,” Pei said.

“I am afraid this does not conform to the standard of using virtue to lead the people and using the rules of decorum to promote good behavior.”

I am no one special; all that I do is follow my conscience, and I have nothing to hide.
— Sima Guang

Taizong was pleased by this remonstration and praised Pei for his reasoning and courage to speak the truth.

Sima Guang, for his part, assessed the incident from a different angle, using it to advise rulers to set a moral example for their subjects.

“The ancients had a saying that enlightened rulers will have honest ministers,” Sima commented.

“That Pei Ju was a flatterer under the Sui (the previous dynasty) but a loyal minister under Tang was not because his nature had changed. It was because a ruler who is unwilling to hear of his faults can turn loyalty into flattery, while a ruler pleased by straight talk turns flattery into loyalty,” he explained.

“Thus we know that the ruler is like a gnomon (a post for indicating the height of the sun, or the hour of day), and the minister the shadow. When the gnomon moves, the shadow follows.”

Sima Guang advocated “keeping a righteous heart and cultivating morality,” and was a role model of Confucianism who demonstrated loyalty, filial piety, righteousness, and integrity.

He believed that an upright person has honesty in his heart, and he himself cultivated such honesty, consistently matching his words with his deeds.

He once described his own character this way: “I am no one special; all that I do is follow my conscience, and I have nothing to hide.”

An example of his honesty was highlighted once when Sima decided to sell his horse. In providing information about the horse, along with its attributes he also mentioned that the animal was regularly sick during the summer.

His surprised butler asked: “People usually try to hide the flaws in the things they want to sell. Who would tell others about a sickness that no one can see?”

Sima answered, “Money is far less important than our reputation for honesty, which we cannot afford to lose.”

Hearing this, the butler felt ashamed.

Sima Guang’s example of integrity motivated many people from all walks of life to live by higher ethical standards.

There was a saying directed at those who had committed wrongdoing: “For shame! Have you not heard of the honorable Sima Guang?”