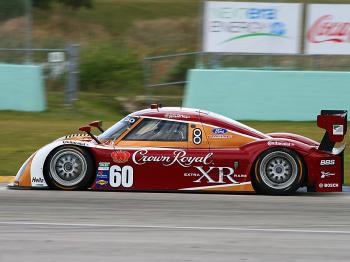 By James Fish
Print
John Pew, driver for the Grand Am Rolex Michael Shank Racing team, has a long string of successful races at Barber Motorsports Park, and hopes to extend that string this Saturday’s Porsche 250.

Pew, with a variety of co-drivers, finished third in 2008 and 2009, and second in 2010 at Barber Motorsports park, the Birmingham, Alabama racing facility and museum that hosts the Porsche 250.

“I’m not sure what it is exactly about this track, but I’ve had some very good races at Barber and hopefully we can again on Saturday,” said Pew in a press release. “It’s a very technical place, and Michael Shank Racing is so strong on the engineering side that I know that helps us at a track like Barber.

“It’s such an amazing facility and the museum is incredible, every time you visit. So it’s always a great weekend, and of course it’s even better when you’ve had the results that we have had there!

“We want to make some ground up in the championship fight, and this could be the perfect place to do that.”

Michael Shank Racing has had decent, if not stellar results in 2011. Thr #60 car finished 10th in the Daytona 24, and ninth at the Miami Grand Prix. The #6 car, run only at Daytona, finished seventh, while the #23 car, co-sponsored by United Autoworks, finished fourth at Daytona and sixth at Miami.

Pew and Negri are prepared to use everything they have learned in their past successes at Barber to gain an edge in Saturday’s race.

“We have had some good cars but not any good luck!” Ozz Negri said team’s early-season results. “We are not where we should be in the championship but we have a good opportunity to make up some ground this weekend with a good finish.

“We’ve normally unloaded with a quick car at Barber, but we all have some learning to do with the new Continental Tire so we can see what the characteristics are going to be like this weekend.

“Being fast over one lap will only be important in qualifying. We know we have to be kind with the tires to be fast over a long run, so that’s what we’ll work on and then see where we come out on Saturday.”

Shank Racing is certain it has learned from the problems which have hindered the #60 car so far. The team is determined to get the win which has so far eluded them at Barber.

“For whatever reason, we’ve had more success at Barber than almost any other track,” team owner Mike Shank said in the press release.

“We’ve never won there and that’s our goal this weekend. It’s great to have the confidence that this team does at Barber and we are hungry for points. The best possible way to move up in this championship is with a win. John has been doing a great job in qualifying, and Ozz is as good of a closer as there is out there, so we just want to play our strategy right and hopefully come out on top.”

The Grand Am Rolex Sports Car Series Porsche 250 from Barber Motorsports Park starts at 4 p.m. Saturday, April 9. The race will be preceded by the Continental Tire Barber 200 at 12:30 p.m., and followed Sunday by the IndyCar Grand Prix of Alabama.