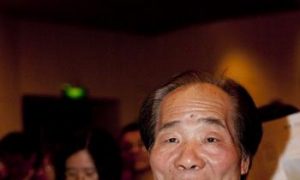 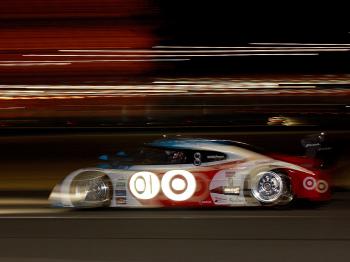 A photographer tries to work through the early morning fog during the Rolex 24 at Daytona International Speedway. (Sam Greenwood/Getty Images)
Motorsports

By James Fish
Print
At 6:30 a.m., the race has been under yellow for over an hour as dense fog covers the track.

The yellow was originally called on lap 424 when Doug Barron stuffed the #81 Ferrari into the tire barrier at Turn One. On lap 452, the track is still under full-course caution; the fog has grown worse, and the race may need to be red-flagged until daybreak..

The two Gansassi cars lead—Joey Hand in the 01 and Jamie McMurray in the 02—with Buddy Rice in the #5 Action Express car in third. Shank Racing has three cars in the top eight. Krohn Racing sits fourth, the other Action Express is sixth. Only the top four are on the lead lap; the #9 Action express car lost a lpa when its headlights failed.

In GT, the running order is Mazda, Porsche, Porsche, with Charles Espenlaub in the #40 Dempsey Mazda leading Bryce Miller in the #48 Miller Porsche and Spencer Pumpelly in the 67 TRG Porsche—still without a working clutch.

On lap 403, Two drivers—Tim Sheehan in the #65 Chris Smith Porsche and E.J. Viso in the #2 Duncan/Starworks Ford Riley were given stop-and go penalties for missing the chicane. Viso then sped on pit lane, earning a second drive-through.

Hurley Haywood’s Brumos Porsche sprung a radiator leak and had to pit for repairs,. The car ins now 34 laps down.

Mitch Pagery, getting into the #65 Chris Smith after its drive-through, had a fire caused by spilled fuel. No one was injured.

After the yellow, Nick Tandy, driving the #17 Burtin Racing Porsche, broke a ball joint and had to retire.