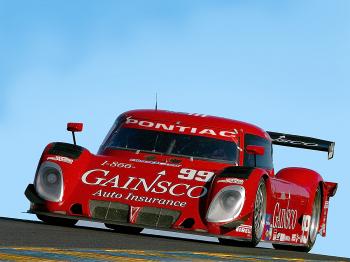 Jon Fogarty and Alex Gurney in #99 Gainsco/Stallings Pontiac Riley will start form the pole at the Grand Am Grand Prix of Miami, part of the SpeedJam weekend. (Darrell Ingham/Getty Images)
Motorsports

Gurney, Fogarty on Pole for Grand Am Grand Prix of Miami

Gurney and Fogarty hold an eight-point edge over nearest rivals Brian Frisselle and Max Angelelli in the SunTrust Ford Dallara, which qualified second with a lap of 1:13.163.

While Gurney and Fogarty are eager to regain the championship title they won in 2007 and lost to the Telmex-Ganassi squad in 2008, the SunTrust team has not won the series since 2005, when current driver Max Angelelli duoed with team owner Wayne Taylor to take the title. The SunTrust crew is more than ready to win it all this year.

Qualifying third was Romain Dumas and co-driver Timo Bernhard in the Verizon Porsche Riley, with a lap of 1:13.237. The Porsche has yet to win a race this season, so they will be pushing themselves and their car to the limit.

All season the Grand Am management have been adjusting the car’s specifications to balance the 3.6 liter flat six with the 5 liter V8s, and at the last race at Miller Motorsports park in Utah, seemed to have it right  as the Porsche was able to run with the race leading Gainsco car. This could be the Porsche’s day.

Defending champions Memo Rojas and Scott Pruett, who lie third in the standings, ten points out of first, qualified a disappointing seventh in their Telmex-Ganassi Lexus Riley, with a time of 1:13.881. Over the course of a three-hour race, with pit stops, racing incidents, and inspired driving, they should have plenty of opportunities to get to the front of the pack and to defend their title.

In the GT class, Nick Ham and Sylvain Tremblay in the Speedsource Mazda RX-8 scored their first pole of the season with a lap of 1:18.848 at 105.012 mph. The Team Drinkin’ Mate Pontiac GXP.R of Kelly Collins and Paul Edwards sits in second place in the standings and will be starting second on the grid. This is the only team with a chance to take the title from the Farnsbacher Loles Porsche of Leh Keen and Dirk Werner. It is guaranteed they will make the most of their good starting position.

Third on the GT grid is another Pontiac, the Stevenson motorsports GXP.R driven by Robin Liddell and Andrew Davis.

The Farnsbacher Loles Porsche qualified fifth with a time of 1:19.812 at 103.743 mph. Possibly the extreme heat and the demanding track work against the Porsches, which are notorious for rear tire overheating problems. In any case, the Farnsbacher Loles team is thirty points ahead of the Drinkin’ Mate Pontiac. Any decent finish will win the championship for Farnsbacher Loles.