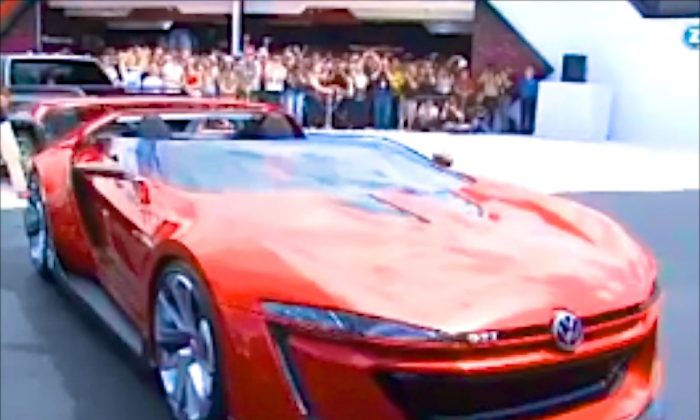 A Dream come true, Volkswagen presented the first ever Volkswagen GTI Roadster at a GTI-Meetup in Austria´s pittoresque city of Reifnitz on Lake Woerthersee. The car was first seen in the Video Game 'Gran Turismo 6'. (AOL)
Autos

The Volkswagen GTI-meeting in the beautiful setting of Austria´s Lake Woerthersee is notorious for new product presentations from Volkswagen. But this time around the German Car Manufacturer has really shown an astounding new model: For the first time ever a Volkswagen GTI Roadster was shown to the public.

First seen in the Video Game ‘Gran Turismo 6’ the open 2-seated sports car has now become reality. The 3.0-litre-Biturbo V6 engine works as a four-wheel-drive and comes with 503 horsepower.

Volkswagen’s head of design Klaus Bischoff says it’s a ‘homerun’ for him and his team. ‘This is a car like a dream, like a sculpture’, Bischoff says. ‘We were able to leave everything else aside and fully focus on performance and design.’

The Bad News is: The GTI Roadster is only a concept car and Volkswagen has stated it won’t mass produce the car. But for fans of the VW GTI Roadster there will always be the virtual world…