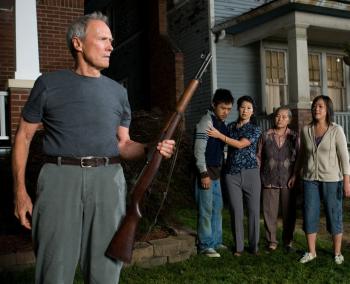 By Mike McCaw
biggersmaller
Print
Clint Eastwood has become Hollywood’s elite, establishing his ability to display life through film. Gran Torino conveys living and dying through the eyes of Walt Kowalski (Clint Eastwood), a Korean War veteran who has lived on the same street in Detroit for the last 30 years. Walt does best to growl his way through his days.

Walt Kowalski is a retired auto-worker who fills up his days drinking beer and maintaining his property. After his wife’s passing, his life becomes unexpectedly more active. His children are almost as distant as strangers on the street. The neighborhood in which he lives has changed completely since the time when he first moved in. The streets are now filled with gangs trying to claim territory. Walt truly despises his next-door neighbors, who are of the Hmong ethnicity.

One evening, a large commotion spills into his yard. He becomes directly involved in the conflict when he scares off the gang members by bringing out his M-1 military rifle, a gun he has kept from the Korean War.

The following morning after the commotion has been dispelled, several people from the Hmong community begin to leave gifts on his porch. During this time, Walt is introduced to his neighbors Thao (Bee Vang) and Sue (Ahney Her), who are brother and sister in the house directly adjacent to his.

Walt, disapproving of the gifts, asks them “Why?” This opens up the dialogue between the two households, and Thao apologizes to Walt for trying to steal his prized Gran Torino. Due to traditional beliefs, Thao is forced by his mother and sister to work off his debt to Walt. Throughout all of this turmoil, Walt is continually harassed by a 27-year-old Catholic priest who promised Walt’s late wife that he would take Walt’s confession.

Gran Torino does an outstanding job of depicting the real-life scenario in Detroit, where the filming actually took place. The Detroit community saw a great number of its residents leave after the 1968 riots, which opened the door to the new residents Walt has come to loathe. Many of the shots in the film display mowed empty lots and littered streets—a landscape that decorates the city.

Another authentic scene in the film includes a police car from Highland Park, a small urban city surrounded by Detroit. In this hostile community, many of the residents refuse to speak out about crimes due to fear of retaliation from the assailants and a lack of police presence.

Clint Eastwood does an excellent job portraying Walt, truly embodying the character. The last time Eastwood took the screen was in 2004 with Million Dollar Baby, and the film received an Oscar for Best Picture.

Walt resembles Eastwood somewhat as they both were Korean War veterans. Many cast members are given breakout roles or first-time roles in this film. The majority of the actors and actresses who play Hmong characters are Hmong themselves. Bee Vang, who plays Thao, is a 17-year-old Hmong newcomer from Minneapolis, where the film was originally scripted to be filmed.

When most filmmakers would be retired and out playing golf, Eastwood is starring in, directing, and even composing music for films. In Gran Torino, he shows the movie-watching world that he’s still king of the mountain. Come February, Gran Torino will definitely walk away with an Oscar.