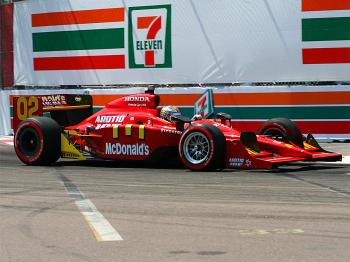 Graham Rahal won the pole at the 2009 IndyCar St. Pete Grand Prix, the youngest driver to do so. (James Fish/The Epoch Times)
Motorsports

The two-year contract will provide primary sponsorship for an IndyCar, but does not specify which team will provide and operate the car. TBC’s president, Bob Crostarosa, said only that Rahal and TBC are shopping for a team that can “run up front.”

Other teams mentioned include Newman-Hass Racing which gave Rahal his start in IndyCar, Rahal-Letterman Racing, which is owned by Graham’s father, Bobby Rahal, and Panther Racing, whence current driver Dan Wheldon is rumored to be departing.

By dint of hard work he managed to cobble together sponsorship for twelve of the seventeen races, often in sub-par equipment on low-budget teams.

The TBC sponsorship is great news for Rahal fans and also great news for the sport. As a young a personable American driver, Rahal attracts many fans and is a great publicity draw for the series. He has been featured in ads promoting the series, something which is sure to continue now that he will have a stable, well-funded ride.

While the dollar amount has not been disclosed, it is estimated to coast at minimum $5 million per year to run an IndyCar team.

TBC Corp. is owned by Sumitomo Corporation, one of Japan’s biggest trading and investment corporations.