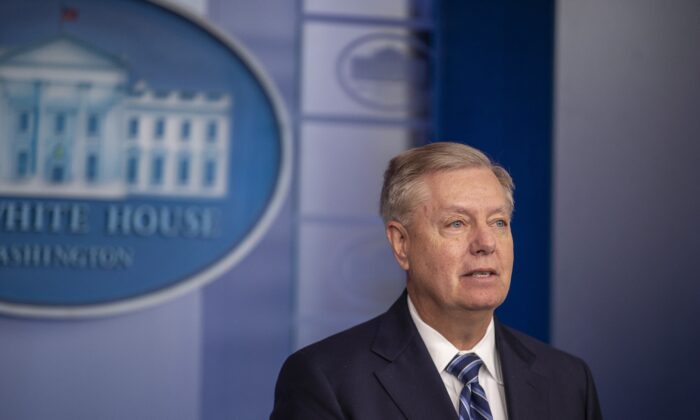 Senate Judiciary Committee Chairman Lindsey Graham (R-S.C.) responded to the Department of Justice Inspector General’s report released on Monday by saying the FBI should have halted their investigation into President Donald Trump’s 2016 campaign when it saw that a dossier compiled by a former British spy was phony.

“I believe there will be no debate among reasonable-minded people … about how the system not only got off the rails but, in my view, became a criminal enterprise to defraud the FISA [Foreign Intelligence Surveillance Act] court to deny American citizen Carter Page his constitutional rights and to continue an operation against President Trump as president of the United States that I think was fundamentally flawed and unlawful,” Graham said during a press conference on Monday.

Page was a former Trump campaign associate who was placed under surveillance four separate times for a total of 12 months.

“If I was Mr. Carter Page, I’d hire me a lawyer and I’d sue the hell out of the United States,” Graham said. “What they did from that point on, this whole endeavor became a criminal conspiracy to defraud the court, to trample on the rights of an American citizen, Mr. Carter Page,” he added.

The longtime senator noted that “if that doesn’t bother you, you hate Trump way too much.”

Predictably, some media allies of Democrats spinning hard. This is what the investigation was about, pg 361:

That, alone, is indefensible

Other Republicans in Congress, including Sen. Chuck Grassley (R-Iowa), said they have serious concerns about the inspector general’s findings.

“Anyone who values fundamental civil liberties in the United States should be disgusted and terrified by what the inspector general uncovered in today’s report on the FBI’s spying on an American citizen. That such abuse was carried out against a citizen working on a political campaign is just that much more disturbing,” Grassley wrote.

Sen. Thom Tillis (R-N.C.), another member of the Judiciary Committee, said the report’s findings are “deeply disturbing, revealing numerous missteps and interference during the FBI’s investigation.”

Inspector General Michael Horowitz, in his report, concluded that the FBI’s decision to open an investigation wasn’t motivated by political bias but found the four applications for warrants to spy on Page contained 17 significant errors. The errors and other failures amounted to “serious performance failures by the supervisory and non-supervisory agents.”

“Steele himself was not the originating source of any of the factual information in his reporting. Steele instead relied on a Primary Sub-source for information, who used his/her network of sub-sources to gather information that was then passed to Steele,” the inspector general’s report said.

Rep. Mark Meadows (R-N.C.), who sits on the House Committee on Oversight and Government Reform and Committee on Foreign Affairs, said mainstream news outlets are focusing on the wrong details of the report.

“Predictably, some media allies of Democrats spinning hard,” he tweeted, pointing out that Horowitz’s report found on pg 361 that “numerous serious factual errors and omissions in the FISA applications … that undercut certain allegations in the applications.”

He said that fact “alone, is indefensible.”

For starters, the “no bias” talking point you see is misdirection from the left. See this line, from the IG:

The Hillary Clinton campaign and the Democratic National Committee ultimately paid for Steele’s work—a fact the FBI did not disclose in the warrant application.