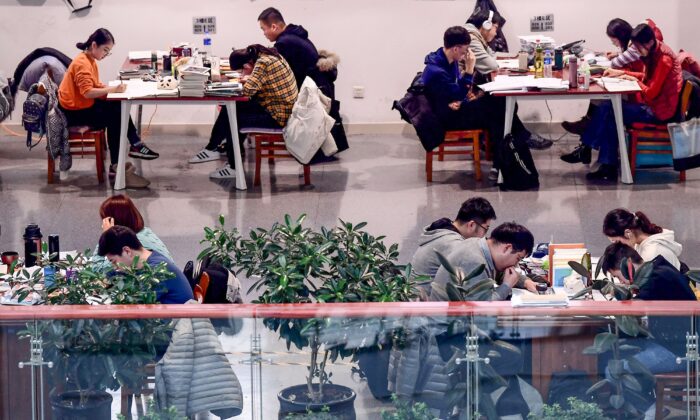 University students are seen preparing for the upcoming National Postgraduate Entrance Exam (NPEE) at a library in Shenyang in China's northeastern Liaoning Province on Nov. 26, 2019. (STR/AFP via Getty Images)
By Olivia Li

A graduate student at China’s Nanjing University of Posts and Telecommunications committed suicide on the night of Dec. 25 by setting a fire in a lab. The school authorities strictly blocked information about the incident so that even students in the same department didn’t know about his death. It wasn’t until the student’s mother was seen at the top of a school building crying loudly and blaming the school for her son’s death that people learned what happened.

Tan Dawei was in his third year of graduate school in Material Science at the university. His dormmate revealed that Tan was severely depressed because of constant exploitation and verbal abuse by his academic advisor over three years.

Early in the morning of Dec. 26, a fire was seen in the Material Science laboratory building. The entire building was immediately sealed off once the fire was extinguished. Police officers visited the school that afternoon. However, students in Tan’s faculty had no idea how the fire started or that Tan ended his life in the blaze.

On Jan. 5, Tan’s mother was seen on the roof of the school’s history building on campus, crying and tragically saying: “Return my son to me. Where is justice?” The building is located in a high-traffic area. It was only then that people learned of Tan’s tragic death.

A student living in Tan’s dormitory posted chat messages online indicating that Tan said he had been verbally abused, humiliated, and exploited by his female academic advisor, Zhang Hongman, over the past three years.

According to the messages, on the afternoon of Dec. 25, Zhang refused to help Tan revise his research paper, and forced him to sign an agreement to delay his graduation date. She even demanded that Tan pay for the nitrogen he used in the lab.

Another student, whose lab is close to Zhang’s lab, revealed that Zhang often berates her students, and her voice is so loud that it can be heard all over the building. When she comments on students’ research notes, more often than not she uses harsh words such as, “deduct money [from your paycheck],” “you should know better and get out of here,” and “drop out now.” These are likely her responses to students whose research doesn’t produce good results.

One of Tan’s classmates told Tencent News that Zhang owns companies that sell chemical reagents, and she regularly uses her students as cheap labor, such as for delivery or accounting, for these companies. This activity is said to be an open secret in Zhang’s department.

Also, Zhang is known to use her lab as a warehouse for her companies, which explains the variety of flammable liquids available to Tan to set the fire. Actually, they were not typical reagents found in a material science research lab.

According to the Chinese data platform Tianyancha, there are two companies under Zhang’s name, one in Nanjing and the other in Changchun. She is listed as the principle shareholder and supervisor of both companies.

Chinese netizens were impressed that the authorities could thoroughly block the news of Tan’s death for a whole week. Local journalist Ms. Zheng told Radio Free Asia that shortly after the fire, local media were told they were not allowed to get details about what happened.

A university professor surnamed Zhou, who chose to remain anonymous when speaking to Radio Free Asia, said: “In today’s China, it is very common to block information when something bad happens. In universities, there is an unspoken rule—school authorities will punish anyone who reveals secret information to the outside.”

In addition, Zhou revealed that using graduate students as cheap labor is a common practice in Chinese universities.

Tan is not the first graduate student at this university to commit suicide because of exploitation by an academic advisor. In early 2016, a graduate student named Jiang Huawen jumped from the ninth story of a building. His advisor, Zhang Daiyuan, had verbally abused him in public on several occasions, and did not allow him to graduate when he should have.