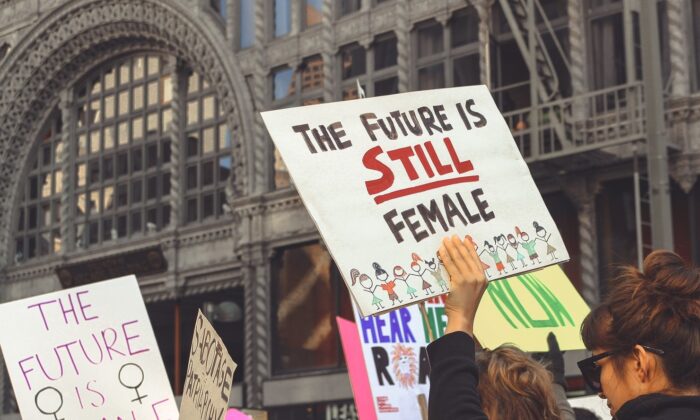 GQ Imagines a World Without Men

GQ, that arbiter of truth, fashion, and manhood, has decided it’s not that men aren’t man enough, it’s that they’re too manly. Most recently, the men’s fashion magazine proposed solutions to this problem in their “New Masculinity” issue.

In the issue, GQ’s editor-in-chief, Will Welch, says he’s doing this because “traditional notions of masculinity are being challenged” and “overturned.” However, the “new masculinity” presented in GQ, which is a blend of stereotypes associated with femininity, homosexuality, and heterosexuality, isn’t only an affront to traditional masculinity, but an attempt to completely eradicate the obvious and wonderful differences between men and women.

You might have seen this issue of GQ already. Its cover, boasting singer Pharrell Williams donning something akin to a banana that attended a ballroom dance and then went camping, is hard to miss. I tweeted about it and the reaction was swift and fierce—it was one of the most popular tweets I’ve ever posted.

Most of the people who commented despise the “new” masculinity. But why? After all, isn’t the “old” masculinity too rigid, stoic, and—don’t forget—predatory, if not criminal?

Masculinity then and now pic.twitter.com/fJZQWaWhfX

GQ doesn’t come right out and say that, but inside the issue, it took the liberty of presenting “masculinity” as a range. The magazine highlighted 18 “powerful voices” to offer suggestions on how we, as a collective society, might better support a new kind of manhood.

There’s a section advertising how men can better wear makeup. The tips are from a transgender model, of course, who suggests mascara. On men. Another tip comes from Hannah Gadsby, a female comedian, who tells men to essentially just behave more like women. The only credit I can give her here is that she inadvertently nails the crux of the issue—and the aim of feminists and the “new manhood” alliance alike—which is to tear down masculinity and simultaneously erase the differences between men and women.

Second, Welch, the editor-in-chief, connects masculinity with the now-en vogue phrase “toxic masculinity,” saying that masculinity should be challenged because “toxicity simply cannot thrive in the golden presence of genuine self-love.” I don’t know what that phrase means exactly, but I can tell you that toxicity almost certainly can survive, and does, in fact, thrive, when love of self is present before love of others or God.

In fact, selfishness is a hallmark of toxic people.

It’s important to establish that even though there are selfish, predatory, even criminal men, this does not mean masculinity is toxic. The cure to those ills is not to quash masculine traits but to increase them in a healthy, stable way, establishing respect.

Finally, the effeminate nature of the GQ cover, and some of the similar advice inside, demonstrates the most telling—and toxic—aspect of this venture.

The goal isn’t just to diminish manhood but to erase it entirely and replace it with womanhood. Somehow, progressives have developed this notion, thanks to the third wave of feminism, that men aren’t just annoying or patriarchal, but are entirely unnecessary. Nothing could be further from the truth.

Men and women have biological and physiological differences that are integral to society, and often complement one another. A 1997 article by Brazilian researcher Renato Sabbatini in the online magazine Brain and Mind describes just a few of those innate differences. It’s a bit older but actually demonstrates my point, because it outlines differences that are still obvious despite the passage of time:

“Scientists know also that there are many other subtle differences in the way the brains from men and women process language, information, emotion, cognition, etc.

“One of the most interesting differences [appears] in the way men and women estimate time, judge speed of things, carry out mental mathematical calculations, orient in space and visualize objects in three dimensions, etc. In all these tasks, women and men are strikingly different, as they are too in the way their brains process language. This may account, scientists say, for the fact that there are many more male mathematicians, airplane pilots, bush guides, mechanical engineers, architects, and race car drivers than female ones.”

So if the research—and male and female brains—haven’t changed, what has? The way we—and by we, I mean progressives—talk about it has regressed. Instead of accepting differences and applauding both men and women for them, progressives believe somehow society would be better off if men were neutered and blended into something more like women.

I can’t think of anything worse than a world without men. If progressives get their way, applauding magazines like this new GQ issue, that’s exactly what we’ll have.