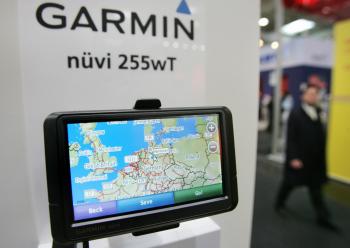 A Garmin Nuevi 255wT GPS navigation system is on display at the Garmin stand at the CeBIT trade fair earlier this year. (JOHN MACDOUGALL/AFP/Getty Images)
Business

One of the most anticipated features on the new Apple iPhone 3G was a GPS system.

NEW YORK—One of the most anticipated features on the new Apple iPhone 3G was a GPS system. Although the GPS system on the phone lacks turn-by-turn directions, it is far and away more advanced than the cell tower triangulation GPS system found on the first iPhone.

As the digital entertainment and business world converge, lines are increasingly blurred between the many different devices. That development alone is keeping some GPS makers up at night.

In May, Research In Motion Ltd., the Canadian maker of BlackBerry smartphones, introduced BlackBerry Bold, the next generation BlackBerry model. However, today’s BlackBerry is no longer the boxy e-mail device from a few years ago. The BlackBerry Bold, code named 9000, will have support for videos, music, WiFi, and most importantly, a GPS system with “BlackBerry Maps” and turn-by-turn instructions.

GPS is a relatively recent phenomenon, but already the market is saturated with hundreds of manufacturers and prices are falling fast. Garmin Ltd., one of the largest makers of GPS devices, announced nüvifone, a touch screen phone with full GPS functionality. The phone, according to Garmin, will be available early 2009.

Why is Garmin diving into the phone market with a phone eerily similar to Apple’s iPhone? The GPS market is forecasted to approach $16.5 billion by 2013, according to iSuppli Corp. Some GPS makers believe that the GPS systems of the future will not simply be positioning devices, but digital computers with the ability to make phone calls, view photos, and listen to music.

Already, GPS makers are packing more bells and whistles into GPS systems. Garmin’s nüvi 880 includes digital speech recognition capabilities, saving the owner from having to type in the destination address. TomTom’s new GO 920 GPS also has voice recognition, and both devices include extras such as music player and photo viewer.