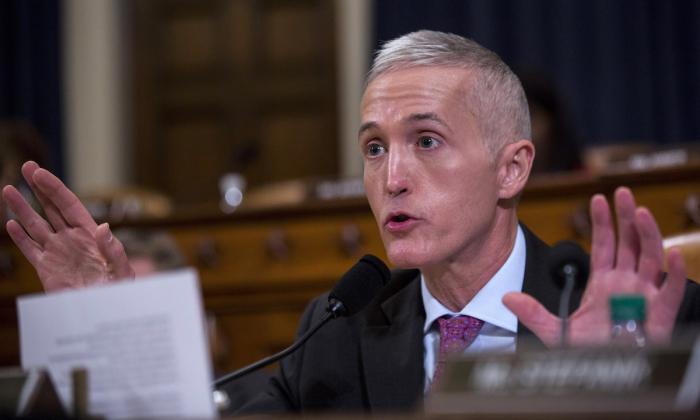 Gowdy excoriated Comey for delivering a watered down exoneration of Clinton, making decisions on his own, and not seeking a special counsel in the Clinton email investigation, while going out of his way to do so in regards to President Donald Trump.

Justice Department Inspector General Michael Horowitz testified before lawmakers for the second day on June 19 about his office’s extremely detailed report. Among other issues, the IG report concluded that Comey usurped the power of the attorney general and ran afoul of longstanding Justice Department policies when he delivered a public exoneration of Clinton in July 2016.

In making the exoneration announcement on July 5, 2016, Comey appropriated the charging decision from the prosecutors, Gowdy said. The FBI director also drafted the exoneration before interviewing key witnesses, including Clinton herself.

On June 18, Horowitz confirmed that his office is investigating Comey’s leak of classified information.

Trump fired Comey last year for his handling of the Clinton email probe. The inspector general’s report backed up the president’s rationale for doing so, citing the same violations of department policy that Deputy Attorney General Rod Rosenstein listed in his written recommendation to Trump to fire Comey.

Comey’s deputy director, Andrew McCabe, was fired earlier this year for allegedly authorizing a self-serving leak and lying about it to Comey and investigators, including under oath.

Despite uncovering pervasive bias by key agents handling the Clinton email probe, Horowitz said that his investigators believe that no evidence exists to prove that the bias impacted key investigative and prosecutorial decisions in the case. Gowdy disagreed, arguing that the presence of bias corrupted the FBI’s work.

“This inspector general’s report should conjure anger, disappointment, and sadness in everyone who reads it. This IG report lays bare the bias, the animus, the prejudging of facts by senior FBI agents and senior attorneys,” Gowdy said.

“It is not the public’s job to prove the bias shown by the FBI did not influence decisionmaking,” he added. “It is the FBI’s job to prove to the public that this manifest bias was not outcome determinative. Bias and fairness cannot coexist.”

While working the three cases, the pair were allegedly having an affair and exchanged text messages betraying their bias against Trump and in favor of Clinton, as well as a willingness to turn that bias into action.

“[Trump is] not ever going to become president, right? Right?!” wrote Page.

Horowitz agreed with Gowdy that Strzok’s message meant that a group of people were willing to take action to stop Trump from becoming president. Gowdy emphasized Stzrok also said that Clinton would win “100,000,000 to 1” and that Page called Trump a “loathsome human.”

Strzok is also at the center of an investigative decision that Horowitz believes was not free from bias. Investigators were not satisfied with Strzok’s explanation for why he prioritized the investigation of alleged ties between the Trump campaign and Russia over the Clinton emails discovered on the laptop of former Rep. Anthony Weiner.

The inspector general’s report found that three other FBI officials had exchanged messages showing bias in favor of Clinton or against Trump. At least two of them worked on both the Clinton and Trump probes, Horowitz told lawmakers on June 19.

The report concluded that the biased messages “cast a cloud” over the handling and credibility of the Clinton email probe, but did not find evidence linking the bias to any official action.

House judiciary committee chairman Rep. Bob Goodlatte (R-Va.) said during the June 19 hearing: “Public confidence in the impartiality of our law enforcement system is critical to ensure all are treated equally under the law. Fallout from the Clinton investigation, however, gives the impression those with money and influence are given lighter treatment than the so-called common person.”