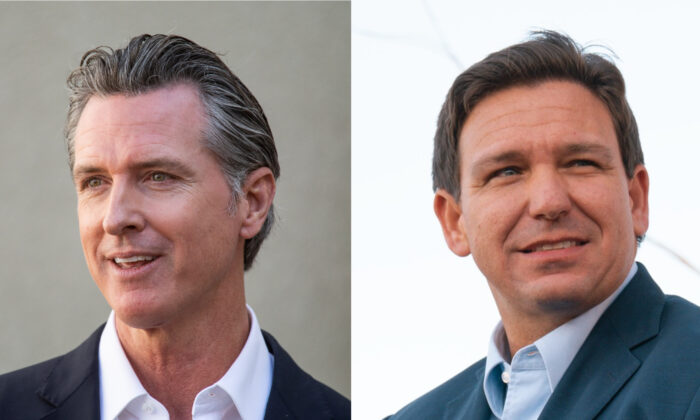 There are some seemingly lighthearted jabs going back and forth between governors in America. Gov. Gavin Newsom advertises for Floridians to move to California; Gov. Ron DeSantis references Newsom’s hair gel as affecting Newsom’s judgment; Newsom demands a debate with DeSantis, and so on.

Other governors are involved also, most noticeably Gov. Gregg Abbott of Texas and Gov. Kathy Hochul of New York. The discourse is slightly obscuring the tectonic movements of American culture and society. There is a historic shift in the population in America. California is now in the loss column for population, two years in a row. New York has been losing population for multiple years and the exodus from New York City accelerated during the COVID-19 period.

The one issue that has inflamed the tenor of the jabs being thrown is the unsecure southern border, which has been counteracted by Red governors sending busloads of migrants to New York City, Washington D.C. and Chicago, and now planeloads to Martha’s Vineyard. With the airborne insertion of migrants by DeSantis into Martha’s Vineyard, Massachusetts, a new level of the struggle between Blue and Red America has been established, and governors are the chief, public personalities.

The unannounced arrival of a planeload of asylum seekers into Martha’s Vineyard by DeSantis has been described as “genius” by diverse personalities such as “Charlamagne tha God.” This surprise event on Sept. 14 has really ratcheted up the brinksmanship. It was a daring and edgy, daylight airfield maneuver, reminiscent of a military raid. What is interesting is that Massachusetts has a Red governor—Charlie Baker (some would debate whether Baker is a Republican), and within a few days, a camp for the mostly Venezuelan arrivals was established on Joint Base Cape Cod.

This drop-off has also garnered a unique countermove. A Democrat sheriff in Texas (Bexar County, around San Antonio) has initiated an investigation against Florida Gov. DeSantis. I’m not clear on the standing for this action by the sheriff, but it’s a form of political warfare punch back. The legacy media has been in a dither about the legality of DeSantis’s move. Even a UK paper, The Independent, took a break from the Royal funeral to analyze the Martha’s Vineyard event.

“Governor General” DeSantis received a hero’s welcome over the weekend in Kansas, a sign that this struggle will only spiral upward. So far, the federal government has been relatively quiet about the matter.

There are new fields and topics that are entering the fray. Virginia Gov. Glenn Youngkin has thrown down the gauntlet in favor of parental rights and overhauling the transgender policy put in place by the previous governor. Youngkin specifically cited Fairfax County as the reason for the new statewide policy. Additionally, Virginia Attorney General Jason Miyares also announced an indictment of a former registrar in Prince William County for alleged 2020 election fraud—the game is on in Virginia.

Fentanyl—originating in large part from China—is a growing part of the struggle. Even Alaska is citing fentanyl coming through the open Southern border with Mexico as one of the top dangers facing citizens. Alaska is far closer to China than Mexico, but China sends the fentanyl, or components thereof, to Mexico first, then across the southern border up through America and Canada into Alaska—a very odd journey. Former President Donald Trump has waded in by proposing death penalties for those involved with the sale and distribution of fentanyl.

The list of topics and actions goes on, but many Red governor generals are acting due to the federal inability to solve the matters.

Next Step—Formalization of Blue and Red State Alliances?

The key contributor to this developing struggle and the rise of the “governor generals” are federal acts of commission or omission. Regardless of which one it is, the breaking point on several topics has been reached, and governor generals are exploring new actions to safeguard their citizens from federal failures and Blue state enablement. Because of the unified Red/Blue moves and countermoves, the next question or level is intuitive. Do Red states start forming inter-state compacts for the common defense of Red territory from Blue states?

Respected and noteworthy centrist professor Jonathan Turley has proposed just that. In trying to keep these matters somewhat civil, Turley’s proposal is an interesting model for like-minded states to cooperate with each other and protect themselves. The temperatures are rising on Blue-Red viewpoints of society, and the chief personalities are the governors—elevating their status to national leadership.

John Mills
Follow
Col. (Ret.) John Mills is a national security professional with service in five eras: Cold War, Peace Dividend, War on Terror, World in Chaos, and now—Great Power Competition. He is the former director of cybersecurity policy, strategy, and international affairs at the Department of Defense. Mills is a senior fellow at the Center for Security Policy.