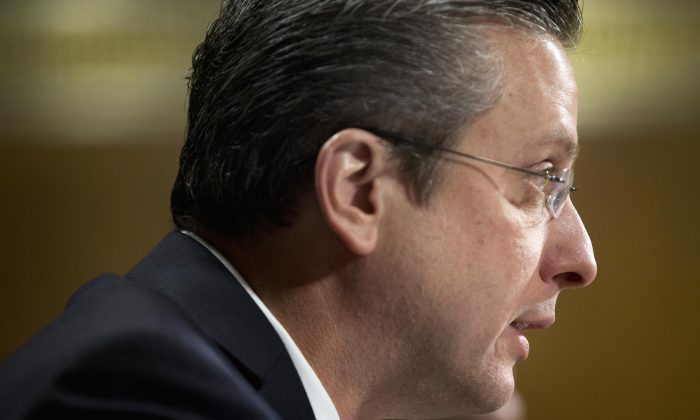 Puerto Rico Gov. Alejandro Javier Garcia Padilla testifies on Capitol Hill in Washington, D.C., before the Senate Judiciary Committee hearing on Puerto Rico's fiscal problems, on Dec. 1, 2015. On Wednesday, Dec. 30, 2015, Padilla said the U.S. territory will make a bond payment due the next week but default on the interest. The island is struggling with billions in public debt that Garcia has said is unpayable and needs restructuring. (AP Photo/Pablo Martinez Monsivais)
Americas

Governor: Puerto Rico to Default on $37M in Interest Due

SAN JUAN, Puerto Rico—Puerto Rico’s governor announced Wednesday that the U.S. territory will meet $594 million in bond payments due next week but will still default on $37 million in interest.

Gov. Alejandro Garcia Padilla said the payment includes $329 million in general obligation bonds. However, he warned there is no money available for future payments, including $400 million due in May in bonds issued by the Government Development Bank.

“I’m not asking for a bailout,” he said. “I’m asking for the tools to address the problem.”

Puerto Rico has been in an economic decline for nearly a decade and its government is struggling with $72 billion in public debt that Garcia has said is unpayable and needs restructuring.

He said the government will be forced to default next week on $35.9 million in Puerto Rico Infrastructure Financing Authority bonds and $1.4 million of Public Finance Corporation bonds. He said the bonds are not protected by the U.S. territory.

This is the second time that Puerto Rico has defaulted on Public Finance Corporation bonds. The government missed a $58 million bond payment in August.

Garcia has stressed that the government’s priority is to maintain operation of basic services such as schools, hospitals and police stations.

“Puerto Rico is going to pull through,” he said. “These decisions are made to protect Puerto Ricans.”

The U.S. Treasury said in a statement that the impending default demonstrates the gravity of the island’s situation and the need for Congress to act.

“Puerto Rico is at a dead end, shifting funds from one creditor to pay another and diverting money from already-depleted pension funds to pay both current bills and debt service,” it said.

While Puerto Rico is still pursuing access to a bankruptcy mechanism, U.S. House Speaker Paul Ryan, a Republican from Wisconsin, has pledged that the House will come up with “a responsible solution” for Puerto Rico’s debt problems next year.

In addition, the U.S. Supreme Court announced recently that it would hear an appeal on a ruling that barred Puerto Rico from giving municipalities the power to declare bankruptcy.

“No matter what the outcome is from the U.S. Supreme Court or even from Congress, it won’t come in time to prevent a default and further austerity from taking place in Puerto Rico,” he said in a telephone interview.

The island’s heavily indebted public power company reached a separate debt-restructuring deal earlier this month with its creditors that forgives a portion of its $9 billion debt and would boost its liquidity.