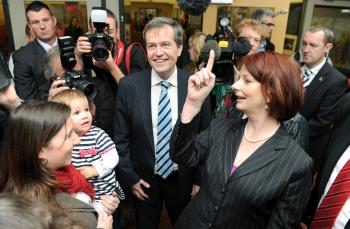 Julia Gillard (R) and Bill Shorten (C) in Melbourne on July 29. Shorten is married to the daughter of Governor-General Quentin Bryce who has the power to choose Australia's next prime minister following the Federal Election stalemate. (WILLIAM WEST/AFP/Getty Images)
US

Following the Federal Election stalemate with neither major party reaching a majority, the Governor General has the power to appoint the next Prime Minister.

While this option has not yet been explored, some analysts have cautioned against her involvement due to an apparent conflict of interest.

Ethicist Leslie Cannold said with a hung parliament looming, Bryce should avoid any perception of a conflict of interest due to the family link, The Daily Telegraph reported.

"It is important for the Governor-General to recognise there is at least the appearance of a conflict, and that she should excuse herself from deciding who forms the next government," he said.

A 1998 parliamentary library paper said it was "generally accepted" the reserve powers of the Governor-General included the ability to appoint a prime minister in the event of a hung parliament.

Bryce, who was appointed by the Queen, also has the power to dissolve parliament, appoint or dismiss ministers, and appoint federal judges.

"The Governor-General is seeking advice on concerns raised about her personal position in the current political circumstances," it said.