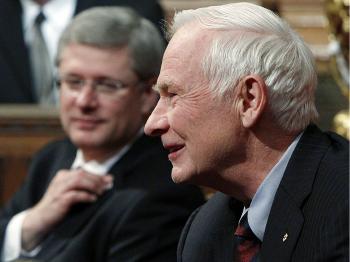 Helena Zhu
View profile
Follow
biggersmaller
Print
With the approach of the New Year, Gov. Gen. David Johnston has extended his greetings to the nation, giving special mention to the Canadian Forces in Afghanistan.

“As a new year dawns, we are filled with a renewed sense of hope,” said the GG in a New Year’s message released Tuesday.

While reviewing the passing of 2010, Johnston said Canadians have strived to “improve the conditions of all at home and around the world.”

He said that when he visited Afghanistan in the early days of his mandate, “I saw a lot of despair, but I also saw Canadians helping and contributing their talents.

“We should be inspired by the courage, determination, and conviction of our men and women in the Canadian Forces.”

“Ten years ago, there were fewer than 700,000 children going to school in Afghanistan. Today, there are more than 6 million, one-third of them girls, and counting,” he said.

He added that rebuilding schools would allow boys and girls to have an education, which is key to reconstructing family life in the war-torn country.

Johnston noted many accomplishments during 2010 worthy of celebrating, such as the Winter Olympics, in which Canada earned 14 gold medals.
“As we embark on a new year, let us not forget our neighbour in need. Let us all work together towards a smarter and more caring nation,” he concluded.

Johnston, 69, became Canada’s 28th governor general on Oct. 1, taking over from Michaëlle Jean, who served in the position for five years.