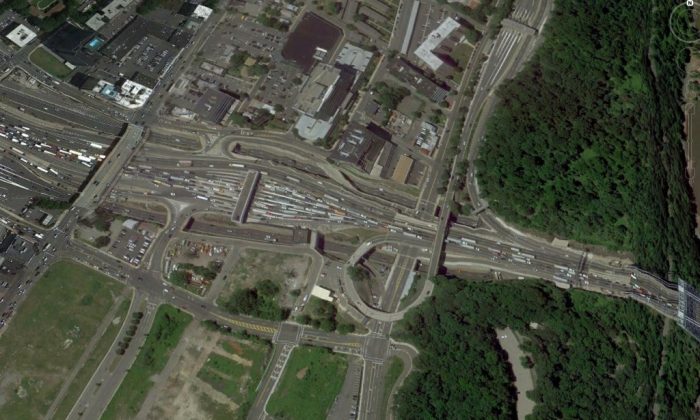 Google Earth image of the approaches to the George Washington Bridge.
Opinion

When someone is in a deep hole, the way to get out of it is to first – stop digging.  Not the kind of digging the investigators at the Port Authority, in Trenton, and now in Washington are doing. They aren’t in deep trouble. They are trying to uncover the truth, which could clear up the whole mystery of the September lane closures, now dubbed Bridgegate.  Gov. Christie, by contrast, is digging his Presidential ambitions a hole he may have trouble climbing out of.

How to Get There From Here

The past few weeks have been interesting in the NYC area to say the least.  As someone whose original hometown was Fort Lee until my parents moved me a few miles North to Bergenfield, this story has intrigued me from day one. Having eaten Italian Sunday dinner in Fort Lee at my Grandparents’ house for all of my youth and having worked for the Palisades Interstate Park, I know the area like the back of my hand.  I even wrote a song about working in the PIPC parking booth on Hudson Terrace just a few blocks from the GWB for hours at a time watching the traffic in, around and under that bridge as I collected the parking fee at Fort Lee Historic Park. (Where the absolute best pics of the GWB can be had from the top of the Palisades).

I also know firsthand that there are a million ways you can go from anywhere in North Jersey to Manhattan, but because of that formidable piece of rock called the Palisades, there are only four ways to cross the Hudson without getting on a boat:  The Lincoln or Holland Tunnels miles to the south through heavily populated Hudson County; The Tappan Zee Bridge, miles to the North through quaint but crowded Nyack in upstate New York;  or Fort Lee – at the GWB.  My regular commute from Paterson to Manhattan through the Lincoln Tunnel used to take me literally two hours.  Each way.  On a good day.  Just getting to work was an adventure.

Because of the traffic, ferries started making a comeback, for those lucky enough to afford ferry tickets to commute. However to even get to the ferries from North Jersey towns you need to get to River Road from the North via Fort Lee.  Jamming the roads in Fort Lee trapped anyone even trying to get to the ferry from North Jersey, or even just the supermarket in Edgewater, let alone the GWB.  My very first traffic counts while working at the Bergen County Engineering Department, were on River Road in Edgewater.  Before the explosion of new luxury condominiums just south of Fort Lee and the associated armies of new commuters on the waterfront there. When you knew why they called it River Road because you could still actually see the Hudson from it. River Road had a lot of traffic even back in 1984.

The Governor’s apparent disdain for traffic related laws reminds me of when he drove down a one way street the wrong way, hitting a motorcyclist, and did not even get a ticket. He was angry the press noticed the story because he was running for Governor. Although no evidence has come out publicly linking him to the lane closures, Gov. Christie lashed out at the Mayor of Fort Lee last week by saying that Mayor Sokolich should have called more people at the Port Authority. The sworn testimony in Trenton showed that that would have been futile, as Governor Christie’s appointee David Wildstein had given strict orders to Port Authority employees not to share any information with Fort Lee Officials.

Gov. Christie then fed into the discredited traffic study narrative by repeating the incorrect rumor that somehow three local lanes are somehow reserved for only Fort Lee residents.  He then expressed outrage by saying that really “sauced’ him.  Hint: If you are trying to make folks think you have nothing to do with something, don’t act like you were so angry about Fort Lee having three local lanes that you ordered the closures, because that’s what it now looks like.

Most folks, myself included, want to wait for the investigation to play out because this is serious.   I used to pass under the GWB on Hudson Terrace to get to River Road in Edgewater from Tenafly. I remember the soldiers in full gear with guns patrolling Hudson Terrace right after the towers fell on 9/11. We all do. This is a big deal to us even though the Governor does not think so.

My office window faced 9W in Englewood Cliffs just 20 feet away from the road on 9/11 just up the street from Fort Lee.  All the first responders from the Northern Valley in Bergen County raced along 9W and got into Manhattan via Fort Lee and the GWB that day. Probably using those very lanes. All day.  I jumped for two years at the sound of an ambulance after that.

To belittle our concerns is shameful – especially when this traffic jam occurred on the anniversary of 9/11. You could literally see the towers fall from Fort Lee. If the whole country suffered trauma from that event, have a little sympathy for the folks who actually lived through it and watched it unfold.

This Isn’t About You, Well Maybe A Little Bit

Lane closures by political appointees with no public notice on the world’s busiest bridge are a serious breach of protocol and regard for public safety and the Governor is making light of it. But the final insult is that the Governor thinks the investigation is being launched because he is famous. No, Governor, that isn’t it.  Thousands of people from all over the NYC metropolitan area who rely on that Bridge daily or who were affected, and the truck drivers who now have to pay $102 dollars just to cross the Bridge, want answers about how the Port Authority is run.  This may not be about you, but you are making it hard for it not to be.