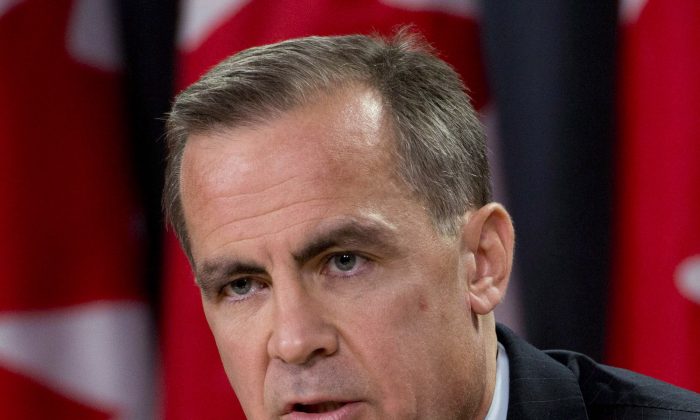 The central banker said Tuesday in his last scheduled public appearance before departing for the Bank of England next month that Canada can coast and wait out the decade-long damage-repair process in the rest of the G7 economies, or build on its strengths for the emerging new global economy.

Carney said the Canadian government is correct in seeking out new trade deals, particularly in emerging economies, because they represent one half of the world’s imports growth and also are essential to securing a position in global supply chains.

The speech to the Montreal Board of Trade, notes of which were released in Ottawa, read somewhat like a valedictory address in which the banker was full of praise for the country’s achievements and endowments, while also urging it on to future successes.

Carney broke no new ground in the speech as he has long stressed the need to transition Canada’s exports-based industries from reliance on slow-growing economies like the U.S. and Europe to fast-growing markets in China and Asia in general.

But the advice took on added currency given it was likely the last time he will pronounce generally on the Canadian condition for at least the next five years, the term of his posting in London.

He noted while Canada’s economy performed fairly well both during the 2008-09 recession and in the recovery, at least in comparison to the other major economies in the G7, it could have done better had the country’s export sector been able to hold up.

He calculated that exports are currently $130 billion less than would have been the case in a typical postwar recession. That represents about eight percent of gross domestic product.

Even so, Canada coped relatively well with the crisis, he said, noting that by the start of 2011 the country had recovered to the GDP level it held prior to the recession and that as of now, there are 480,000 more Canadians working than in the fall of 2008, when the slump began.

It has been able to make the adjustments because fundamentally the Canadian system works, Carney said.

Despite criticism, Canada’s labour market is relatively flexible, with labour mobility similar to that in the United States and about four times as flexible as in Europe.

“Canadians are going where the jobs are,” he said. “Last year, there was a net inflow of more than 40,000 people into Alberta from the rest of Canada, a level of mobility that approaches its previous peak.”

Carney said Canada also has a functioning monetary union despite the lament about provincial trade barriers and the two-speed economy caused by high commodity prices. On the latter, Carney again dismissed the theory that Canada is beset with Dutch disease, whereby high oil prices inflate the loonie and undermines manufacturing.

“When commodity prices increase, all provinces benefit,” he argued. “All else equal, the Canadian dollar appreciates. [But] its adverse impact on our non-commodity exports is partially offset by the fact that a stronger currency reduces the cost of productivity-enhancing machinery and equipment and imported inputs to production.”

Carney also praised what he calls “fiscal federalism,” the often maligned system of wealth transfers from have to have-not regions. Rather than a weakness, the system helps stabilize localized “asymmetric shocks” and share the risks, he said.

Lastly, the central banker said Canada has been well-served by a sound and regulated banking sector, as well as low government debt that allowed policy-makers room to borrow on global markets to stimulate the economy.

Carney said Canada cannot rest on its laurels, however.

“In a rapidly shifting world, only sustained education, ingenuity, and investment can maintain competitiveness,” he said. “This means we must continuously invest in our workforce. With technology and trade transforming the workplace, the need to improve skills across the spectrum of work has never been greater.”