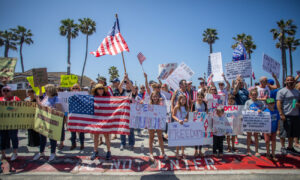 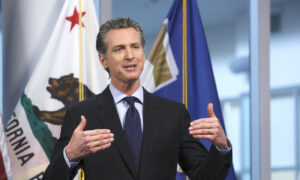 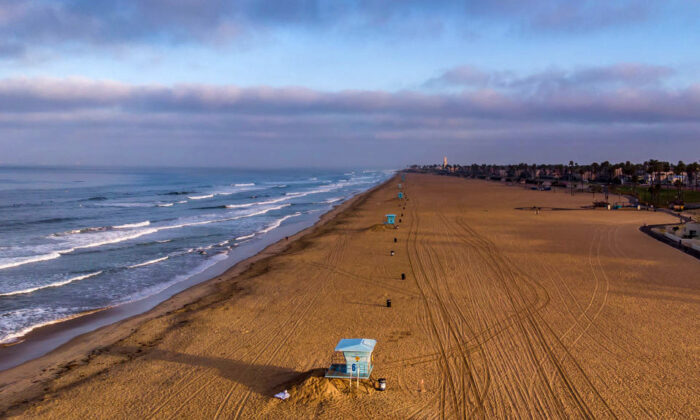 An aerial view shows an empty beach in Huntington Beach, Calif., on May 02, 2020. State officials reopened the last of the county’s beaches for active use on May 7. (Apu Gomes/AFP via Getty Images)
Southern California

SANTA ANA (CNS)—State officials on May 7 approved Orange County’s active-use plans for its 16 percent of shoreline, reopening all of the county’s beaches a week after Gov. Gavin Newsom ordered them shut down when throngs crowded beaches in defiance of COVID-19-prompted stay-at-home orders.

Orange County’s plans mirror the same hours and restrictions in each of the cities where the county has jurisdiction.

During the last week of April, Newsom scolded Orange County officials for not doing more to discourage large gatherings on its beaches. The county had closed parking lots, but officials were not willing to close access to the beaches, and large crowds gathered there when they could not visit beaches in neighboring Los Angeles County.

Orange County Board of Supervisors Chairwoman Michelle Steel and Supervisor Don Wagner complained that the governor made his decision based on newspaper photographs that they argued were deceptive, since a telephoto lens made it appear beachgoers were closer together.

But some Newport Beach City Council members said the crowds were so large it felt like the Fourth of July.

Huntington Beach and Dana Point sued to block the governor’s order, but failed to win a temporary restraining order on May 1.

Huntington Beach officials, however, were continuing to go forward with the lawsuit, city attorney Michael Gates said. And Newport Beach City Councilman Kevin Muldoon, on his own, sued in federal court.

The Orange County Board of Supervisors on May 5 voted 3-2, following a fiery debate, to direct staff to submit a plan for the reopening of its beaches. Orange County Supervisor Lisa Bartlett, who represents much of the south county beaches, pushed for the active-use plan.

Newport Beach city spokesman John Pope said the new beach hours there will be 6 a.m. to 10 p.m., every day of the week, to match the same plan in San Clemente and Huntington Beach.

“The city is very pleased to reopen our beaches for the physical and mental well-being of our residents,” Newport Beach Mayor Will O’Neill said.

“While the active recreation model was not the preferred choice by the City Council, after discussions with our public safety personnel, we are confident that city staff will manage the beaches effectively under the approved plan.”

Newsom on May 6 praised Newport Beach officials for their “collaborative spirit” in working out its plan.

“That’s the spirit that will allow us in real time to make judicious decisions,” Newsom said.

Mayor O’Neill said the city will try to get beachgoers to voluntarily comply with the new rules before having to resort to citations.

The city’s boardwalk on the peninsula, the popular Wedge surfing spot, and the parking lots will remain closed, Pope said.

Seal Beach, Huntington Beach, and Dana Point reopened their beaches for active use on May 5.

The California Department of Motor Vehicles will reopen 25 of its field offices on May 8, including more than a half dozen in Southern California, to assist customers with appointments and “transactions that require an in-person visit to a field office.”

Orange County offices set to reopen are in Fullerton and Santa Ana.

The offices will be open from 8 a.m. to 5 p.m., Monday through Friday, except on Wednesdays, when offices will open at 9 a.m.

All of the agency’s field offices across the state closed March 27 due to the COVID-19 pandemic. DMV officials urged customers to use online services as much as possible.

Social-distancing measures will be in place at the reopening field offices, which were chosen based on their size, location, and service capacity.

The offices will be open for people with appointments and for select transactions.

Orange County officials on May 7 reported 96 more cases of COVID-19 and one additional death, raising countywide totals to 3,092 cases and 66 fatalities.

Fourteen deaths from the disease have been reported since May 4.

The total number of people in the county tested for the virus increased to 43,351, with 1,324 tests reported on May 7.

The Orange County Sheriff’s Department has heightened testing in the jails, and now counts 251 inmates who have tested positive for COVID-19 since mid-March.

Eighteen inmates are sick with the virus as of May 7, according to the sheriff’s department, which is awaiting results of 152 other tests of asymptomatic, quarantined inmates who came into contact with sick prisoners.

None of the inmates have died, and one inmate is hospitalized, said Carrie Braun of the sheriff’s department. Forty-one inmates have recovered since testing began in March, she said.

Three deputies who work at the jails have recovered, but two other sheriff’s employees are still out sick, Braun said.

In the county’s skilled nursing facilities, a total of 302 residents have tested positive for COVID-19, with 20 dying of complications from the virus, according to the county.

The county also reported 167 staff workers at the facilities have tested positive, and one has died.

One of the hardest-hit facilities is Anaheim Healthcare Center on Beach Boulevard, which has 50 patients afflicted with COVID-19, according to Anaheim officials. Four patients have died there, officials said. Twenty staff workers at Anaheim Healthcare have tested positive for the virus.

Another facility in Anaheim with an outbreak is Windsor Gardens Convalescent Center of Anaheim on Ball Road, which has 19 patients and seven staffers with COVID-19, officials said.