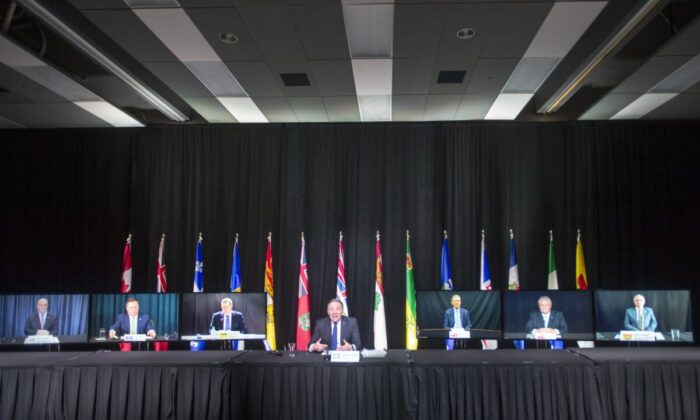 The size of governments in Canada increased enormously during the COVID-19 pandemic, but even before that, the size of the federal government and almost all provincial governments had already grown beyond the optimal point to benefit citizens, a new study shows.

“It’s important to understand just how much governments across Canada have grown in recent years, and what impact that might have on our economic recovery moving forward,” said study co-author Alex Whalen, a policy analyst at the Fraser Institute, in a March 17 press release.

The study, titled “The Size of Government in Canada in 2019,” finds that with the exception of Alberta, between 2007 and 2019 the rest of the provinces saw their governments grow to a size exceeding the optimal level relative to the size of their economies.

In deciding the standard for optimal government size, the authors cited 2013 research by Livio Di Matteo, an economics professor at Lakehead University, who concluded that in order to maximize economic growth in a country, the size of government has to fall between 26 percent and 30 percent of the gross domestic product (GDP).

“When governments exceed that size, it imposes negative effects on the economy, such as crowding out private sector investment, but without providing proportionate benefits such as greater social progress,” the Fraser Institute release said.

“Crucially, the data used in the analysis is prior to COVID-19 and recession-related spending, meaning the size of government already exceeded the optimal size prior to the current spike in spending.”

The study measured federal, provincial, and local government spending in each province, which included spending on goods and services, transfer payments, capital transfers, and subsidies. The total spending was then compared to the size of each province’s economy, as measured by GDP.

The authors also observed a pattern based on geographic location. For example, the size of government is largest in the Maritime provinces, with Nova Scotia taking the lead at 60.2 percent, followed by Prince Edward Island at 58.5 percent and New Brunswick at 57.4 percent of their respective economies.

With Newfoundland and Labrador at 44.1 percent added in, the Atlantic provinces, as well as Quebec (47.8 percent) and Manitoba (47.7 percent), have the largest spending in the country, the authors wrote.

Whalen said while governments across Canada have been growing in size for years, their increase was nowhere near the Atlantic provinces.

“Atlantic Canada has been burdened by a large government sector for decades and the evidence shows that trend continues to this day,” he said.

“Further, an increasing size of government could impair the region’s ability to recover from the economic effects of the pandemic.”

In contrast, the three westernmost provinces had the lowest size of government as a share of their economy. British Columbia came in second after Alberta at 35.7 percent, trailed closely by Saskatchewan at 37.2 percent.

The authors found that even though the governments in Saskatchewan and PEI grew beyond their optimal level throughout the studied period, they were the only provinces that decreased in size in 2019, with 0.5 percentage points, and 3.1 percentage points, respectively.