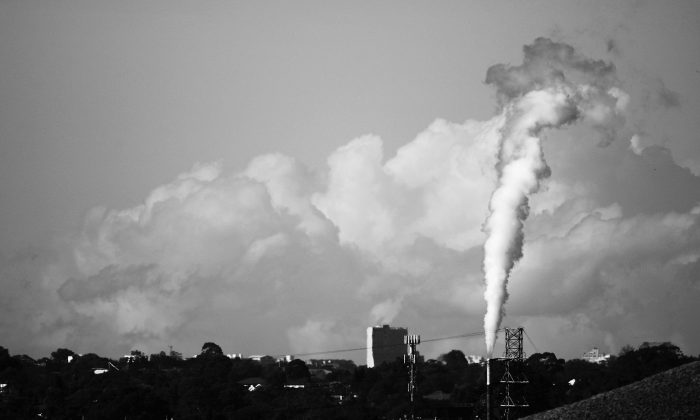 A smoke stack emits fumes June 2, 2007 in Sydney. Australia’s shared commitment to limit the global temperature rise to 2 degrees by reducing its own emissions by 5 per cent by 2020 is inadequate, according to the CCA. (Ian Waldie/Getty Images)
Australia

As smoke still rises from New South Wales bushfires, the climate change debate continues to be fanned by the Federal Government as it pushes to repeal the carbon tax and hold steady on an emissions target.

Australia’s shared commitment to limit the global temperature rise to 2 degrees by reducing its own emissions by 5 per cent by 2020 is inadequate, according to the CCA.

“A 5 per cent target for 2020 cannot credibly be described as a ‘gradual start’ to meeting Australia’s 2 degree budget,” said the CCA report.

If the 5 per cent target is not increased before 2020, it would require an “implausibly rapid acceleration of effort between 2020 and 2030.”

Modelling by the CCA has suggested that Australia will fail to meet its global commitment if it sticks to current targets, with only a 50 per cent chance of limiting warming to below 2 degrees.

The CCA said if the emissions reduction target is changed to 15 per cent (with a 2030 trajectory of 35 to 50 per cent reductions), the probability of meeting the 2 degree commitment would rise to 67 per cent.

Further CCA modelling indicated that switching to a 25 per cent emissions reduction target will cause a $200 decrease in the average Australian income in 2020 – a loss of 0.04 per cent in annual income.

“Talking about deeper emissions targets is pie in the sky without an economically responsible plan to reach them,” Mr Willox said in response to the Climate Change Authority report.

Environment Minister Greg Hunt said the Government will not change its targets until hearing what the rest of the world is planning at the next UN Climate Summit in Paris – in September 2015.

The renewed debate on climate change comes in light of the devastating NSW bush fires, which have put increasing pressure on the Coalition to outline the specifics of their Direct Action Plan.

This week Prime Minister Tony Abbott struck out against claims that climate change was behind the bushfire crisis, calling them “complete hogwash”. Mr Gore likened Mr Abbott’s comments to the tobacco industry exercising their influence on governments to claim smoking does not cause lung cancer.

“Bushfires can occur naturally and do, but the science shows clearly that when the temperature goes up and when the vegetation and soils dry out, then wild fires become more pervasive and more dangerous,” said Mr Gore.

Further, the National Greenhouse Accounts released last week by the Federal Environment Department revealed that under the carbon tax, emissions over the year to March flat-lined (against the increasing trend).

Australian Greens leader Christine Milne welcomed the news saying the figures showed the carbon price was working, as emissions had stayed the same while the economy grew.

“Now is not the time to abandon what is working,” Senator Milne said.

Environment Minister Greg Hunt saw the flat-lining of emissions as an indication the carbon tax has not had a material effect on emissions reductions.

“Now we know that in the first year of the carbon tax there has been no change in our emissions,” said Mr Hunt. “The Government’s Direct Action Plan will actually cut emissions without an economy-wide tax.”

Whether the Coalition’s climate policy can efficiently cut emissions, similar to a market-based policy such as the carbon tax, remains to be seen. Regardless of which policy is implemented, however, a stark warning to increase our targets and goals has been given.