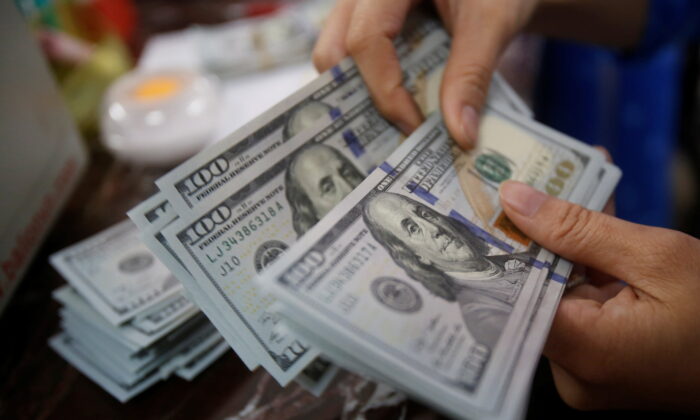 An employee of a bank counts US dollar notes at a branch in Hanoi, Vietnam, on May 16, 2016. (Kham/Reuters)
Business Columnists

Government Spending Is the Real Tax; Deficits Are a Sideshow 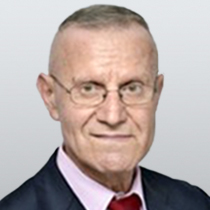 Many economists believe that during an economic slump, government should run large budget deficits in order to keep the economy going with increases in government outlays, with the consequent budget deficit giving individuals more disposable money. This, in turn, will result in an increase in consumer spending that will lift the economy’s gross domestic product (GDP) by a multiple of the increase in consumer expenditure.

Note that the key to this scenario is that expenditures by one person become the income of another. At each stage in the spending chain, people spend 90 percent of the additional income they receive, and the process eventually ends with total output higher by $1 billion (10 x $100 million) than it was before consumers had increased their initial expenditure by $100 million.

Within the multiplier framework, overall demand in the economy weakens because of lesser consumer outlays. Therefore, the government must step in and boost its spending in order to prevent overall demand from declining. According to these economists, increasing the budget deficit in response to larger government outlays can boost the economy.

The goal of emphasizing the deficit, whether to increase it or eliminate it altogether, is the wrong policy. What matters for the economy is not the size of the budget deficit but the size of government outlays—the resources that government diverts to its own activities.

The More Government Spends, the More Resources It Takes From Wealth Generators

Government does not generate wealth. Instead, the more it spends, the more resources it must take from wealth generators. This, in turn, undermines the economy’s wealth-generating process, which means that the effective level of tax is the amount of government spending. For instance, if the government plans to spend $3 trillion and funds these outlays by means of $2 trillion in taxes, there is going to be a shortfall, labeled as a deficit, of $1 trillion.

Taxes force producers to part with their wealth in exchange for unwanted government projects, implying that producers are forced to exchange more for less, which obviously impairs their well-being. The more projects government undertakes, the more wealth is taken away from wealth producers. We can thus infer that the level of wealth taken from the private sector is determined by the size of government activities.

By being a wealth consumer and not a wealth producer, government cannot contribute to the pool of savings. Moreover, if government activities could have generated wealth, then they would have been self-funded and would not have required any support from other wealth generators. If this, indeed, were the case, taxes would not be an issue.

The Meaning of a Budget Surplus in a Money Economy

What, then, is the meaning of a budget surplus in a money economy? It means that the government’s inflow of money exceeds its expenditure of money. The budget surplus here is just a monetary surplus. The emergence of a surplus produces the same effect as tight monetary policy.

A budget surplus does not automatically make room for lower taxes. Only if government outlays are curtailed—i.e., only when the government cuts the number of pyramids it plans to build—will an effective lowering of taxes emerge.

Critics of smaller government will argue that the private sector cannot be trusted to build and enhance the nation’s infrastructure. However, can Americans afford the improvement of the infrastructure? The referee here should be the free market where individuals, by buying or abstaining from buying, decide on the type of infrastructure that is going to emerge given the available resources.

Why Government Cannot Be a Genuine Borrower

One of the ways the government employs in securing the necessary funds is borrowing. But how can this be? A borrower must be a wealth generator in order to be able to repay the principal loan plus interest. This is, however, not the case as far as the government is concerned, for government is not a wealth generator—it only consumes wealth. So how then can the government, as a borrower, producing no wealth, ever repay its debt? The only way it can do this is by borrowing again from the same lender—the wealth-generating private sector. It amounts to a process whereby government borrows from you in order to repay to you.

Government is not a wealth generator; it relies, instead, upon private enterprise for its funding sources. This, in turn, means that the more government spends, the less savings will be available for the wealth-generating private sector. Obviously, this impedes the creation of wealth and impoverishes the economy as a whole. The effective level of tax then is dictated by government outlays—the more government plans to spend, the more savings it will divert from the wealth-generating private sector.

Frank Shostak
Follow
Frank Shostak, Ph.D., is an associated scholar of the Mises Institute. His consulting firm, Applied Austrian School Economics, provides in-depth assessments and reports of financial markets and global economies. He has taught at the University of Pretoria and the Graduate Business School at Witwatersrand University.