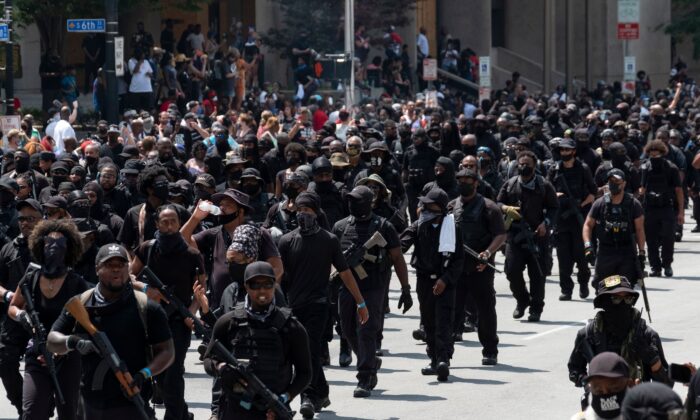 Members of the "Not [Expletive} Around Coalition" (NFAC), an all-black militia, march during a rally to protest the killing of Breonna Taylor, in Louisville, Ky., on July 25, 2020. (Photo by Jeff Dean/AFP via Getty Images)
US

LOUISVILLE, Ky.–The U.S. government wrapped up its case against all-black militia leader John Johnson on May 26 with the testimony of FBI special agent Andrew Phillips, who led the investigation against the defendant.

Johnson is accused of pointing his AR-15 rifle at law enforcement officers during a Sept. 4, 2020, protest in Louisville, Kentucky. His defense attorney, Donald Meier, has argued since the trial began on May 23 that Johnson was simply using a tactical flashlight attached to the rifle.

At the heart of the dispute are two roughly 30-second surveillance videos, each showing Johnson exiting a vehicle with other members of his Not [Expletive] Around Coalition (NFAC), turning on the tactical flashlight, then pointing toward a rooftop before returning the weapon to his side and continuing to walk.

Phillips said on May 26 that when he reviewed the surveillance footage of the incident, he determined that Johnson was threatening the lives of five officers standing on the rooftop.

After discussing the matter with FBI supervisors, Phillips said the bureau opened an investigation into Johnson in mid-September 2020. The probe culminated on Dec. 3, 2020, with law enforcement knocking down the door of Johnson’s Cincinnati townhome with an armored vehicle in an early morning raid.

Phillips said law enforcement flew a drone inside Johnson’s home after knocking down the door and that the defendant appeared voluntarily about 10 minutes later. Johnson agreed to participate in an interview that lasted three hours, Phillips said.

Prosecutor Josh Judd played about 20 minutes of audio recordings from the interview. Johnson and Phillips could be heard discussing the Sept. 4, 2020, incident.

“We were illuminating the building,” Johnson told Phillips in the Dec. 3, 2020, interview.

“You’ve got a weapon shouldered, and your finger is on the trigger,” Phillips said.

Johnson disagreed. “I would never put my finger on the trigger while using that light.”

Johnson said he heard reports of people shooting paintball guns at protesters from rooftops. When someone in his group said there were people on the roof, he shined his light up there to see who it was.

Johnson said he didn’t know the people on the rooftop were law enforcement officers.

“That was not the intended target. I was not aware there were officers involved,” he said in the interview.

Johnson conceded in the interview that his actions were “reckless” and that he, a resident of Ohio, wouldn’t have pointed his rifle at the rooftop had he been familiar with the city’s layout.

On cross-examination, defense attorney Meier criticized Phillips for not telling Johnson specifically why he was being interviewed until more than an hour into the questioning. While Phillips read Johnson his Miranda rights and told him the federal statute he was accused of violating, the FBI agent didn’t specify the incident at which the alleged offense took place, according to Meier.

Phillips said he was employing a specific interview tactic.

Meier also questioned why the FBI waited for about three months after the incident to arrest his client. Phillips said he was still building his case against Johnson during that time.

The defense attorney further noted that Johnson returned to Louisville on Oct. 6, 2020, for a dinner hosted by Louisville Metro Police veteran Yvette Gentry, who was to be sworn in as interim police chief at the time.

“No plan to arrest him then?” Meier asked the FBI agent.

“No,” Phillips responded. “I needed to do additional investigation.”

After Meier’s cross-examination, Judd said the government has no further witnesses.

While Meier has indicated that Johnson may take the stand, on May 26 he said that decision hadn’t been finalized.

Johnson faces up to 20 years in prison if convicted of aiming his rifle at law enforcement officers with the intent of assaulting or intimidating them.