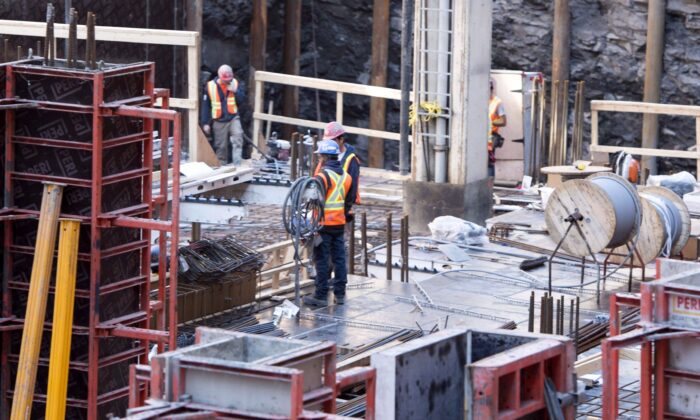 Men work at a construction site in Montreal in a file photo. (The Canadian Press/Paul Chiasson)
Canada

Government Responsible for Over 80 Percent of New Jobs Since Pandemic Started, Study Finds

The government is responsible for over 80 percent of new jobs created in Canada since the pandemic began in early 2020, according to a recent think tank study.

In an August bulletin, the Fraser Institute compared net job growth between Canada’s public and private sectors and found that the public—or government—sector accounted for 86.7 percent of all new jobs created since the pandemic’s outset, leaving jobs in the private sector to account for less than 15 percent of new jobs.

Statistics Canada defines the public sector as consisting of “resident institutional units classified by level of governments,” including “non-market, non-profit institutions (NPIs) that are controlled by government units,” such as public schools and hospitals.

Prime Minister Justin Trudeau said at a press conference on Aug. 31 that Canada’s unemployment rate—the proportion of the population looking for jobs but unable to find work—is currently at a record low. It is at 4.9 percent, based on Statistics Canada’s July Labour Force Survey.

“We have to remember that the Canadian economy has recovered more jobs more quickly than even the U.S. has, following the pandemic,” he said.

Deputy Prime Minister Chrystia Freeland said at the beginning of August that Canada’s “big economic challenge, when it comes to the labour market, is a shortage of workers.”

“When we were fighting the COVID recession, for our government, the priority was to preserve Canadian jobs and to preserve the economic muscle of the country so that jobs could come roaring back when we lifted the pandemic restrictions,” she said during a press conference.

The Fraser Institute’s report said that “media reports and some politicians” have often cited the country’s low unemployment rate to “support claims of a robust labour market recovery in Canada.”

“However, an examination of trends in the public and private sectors of the Canadian economy reveals a more complicated picture,” Palacios and Eisen wrote.

At the pandemic’s outset, over the two-month period from February to April 2020, employment across the country plummeted by almost 3 million jobs, representing a drop of 15.7 percent, according to the report. This pushed the unemployment rate from 5.7 percent to 13 percent during that period.

“To help put these numbers in context, consider that during this same period Canada’s population increased,” the report said, noting that the population over age 15 grew by 2.7 percent over this period.

The share of Canada’s adult population above age 15 either self-employed or employed in the private sector dropped by more than a full percentage point—from 49.3 percent to 48.2 percent—during that period, according to the report. Meanwhile, the share of the adult population publicly employed grew by almost a full percentage point—from 12.6 percent to 13.4 percent.

“This means that once an adjustment is made for population size, employment in the private sector including self-employed individuals remains meaningfully below pre-recession levels,” the report says.