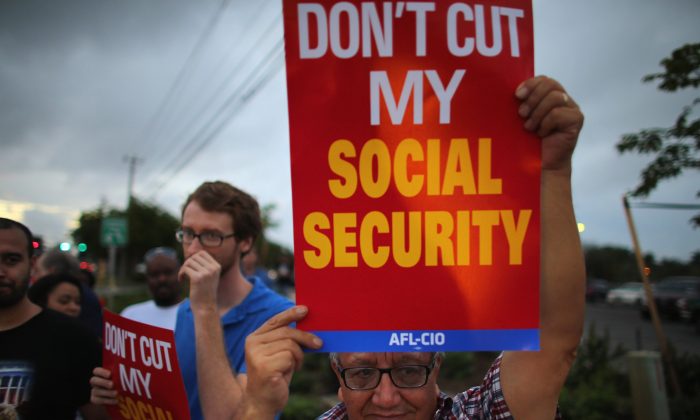 Virgilio Marquina and other protesters rally together outside the office of U.S. Sen. Marco Rubio (R-FL) in Doral, Fla., on December 10, 2012. (Joe Raedle/Getty Images)
US

No Benefit Hike for Social Security Next Year

WASHINGTON—Older Americans got a double dose of bad news Thursday: There will be no cost-of-living increase in Social Security benefits next year, and Medicare bills are set to soar for many.

It’s just the third time in 40 years that Social Security payments will remain flat. All three times have come since 2010.

The annual cost-of-living adjustment, or COLA, by law is based on a government measure of inflation that was released Thursday, Oct. 15. Low gas prices—a boon to all Americans—are driving down consumer prices. Currently the average price of a gallon of regular gasoline is $2.30, about 90 cents less than it was a year ago, according to AAA.

Regardless of inflation, the lack of a COLA isn’t sitting well with many seniors, especially those on a fixed income.

“The price of food has gone up,” said Susan Bradshaw, who lives in a retirement community in Atlanta.

“(The) price of where you live has gone up unless you live in a government-assisted place. Where are you going to get the money to live on?” Bradshaw asked.

The COLA announcement did bring some good tax-related news for high-income workers.

Social Security is financed by a 12.4 percent tax on wages up to $118,500, with half paid by workers and the other half paid by employers. The amount of wages subject to Social Security taxes usually goes up each year. But because there is no COLA, it will remain at $118,500.

But as far as benefits are concerned, the lack of a COLA will affect more than 70 million people, over one-fifth of the nation’s population. Almost 60 million retirees, disabled workers, spouses, and children get Social Security benefits. The average monthly payment is $1,224.

It will also trigger a spike in Medicare deductibles and premiums, though dozens of advocacy groups are lobbying Congress to prevent that.

But that leaves about 30 percent of Medicare beneficiaries on the hook for a premium increase that otherwise would be spread among all. Those who would pay the higher premiums include 2.8 million new beneficiaries, 1.6 million whose premiums aren’t deducted from their Social Security payments, and 3.1 million people with higher incomes.

Their premiums could jump by about $54 a month, to $159. Those with higher incomes could get bigger increases.

States also would feel a budget impact because they pay part of the Medicare premium for about 10 million low-income beneficiaries.

Also, all Medicare beneficiaries will see their Part B annual deductible for outpatient care jump by $76, to an estimated $223. The deductible is the annual amount patients pay before Medicare kicks in.

Senate Democrats, led by Sen. Ron Wyden of Oregon, have introduced legislation that would freeze Medicare’s Part B premium and deductible for 2016, but its prospects are uncertain.

The White House, meanwhile, has said that administration officials are exploring options to mitigate the increase in Medicare costs.

“The COLA announcement not only fails to reflect the actual health care and other expenditures of Social Security beneficiaries, but will actually contribute to a large increase in out-of-pocket health care costs for millions of Medicare enrollees,” Nancy LeaMond, AARP’s executive vice president, said in a letter to lawmakers.

The COLA also affects benefits for about 4 million disabled veterans, 2.5 million federal retirees and their survivors, and more than 8 million people who get Supplemental Security Income, the disability program for the poor. Many people who get SSI also receive Social Security.

Congress enacted automatic cost-of-living increases for Social Security beneficiaries in 1975, when inflation was high and there was a lot of pressure to regularly raise benefits. Since then, increases have averaged 4 percent a year.

But in the past decade, the COLA has been that big only once.

The cost-of-living adjustment is based on the Consumer Price Index for Urban Wage Earners and Clerical Workers, or CPI-W, a broad measure of consumer prices generated by the Bureau of Labor Statistics.

Things to Know About Social Security at 80: Overhaul Time?

It is calculated by comparing consumer prices in July, August, and September each year with prices in the same three months from the previous year. If prices go up, benefits go up. If prices drop or stay flat, benefits stay the same.

But other prices are up. For example, medical care has risen by 2.4 percent, housing costs climbed by 3.2 percent, and food prices were 1.6 percent higher.

Advocates say the government’s measure of inflation does not accurately reflect price increases in the goods and services that older people use.

“The CPI-W reflects the purchasing patterns of workers, many of whom are younger and healthier than most Social Security recipients,” LeaMond said in her letter.