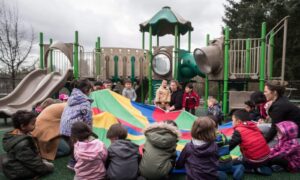 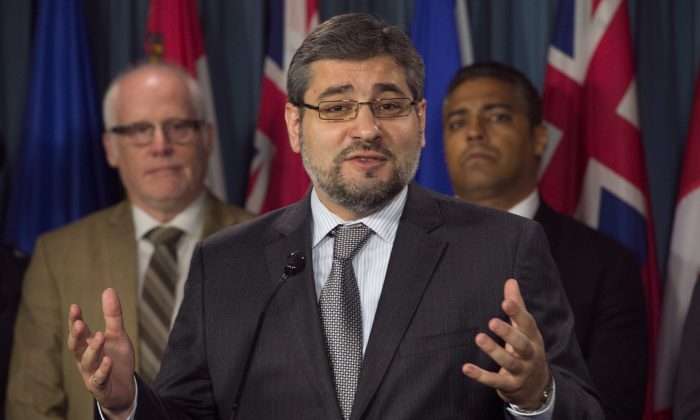 Abdullah Almalki speaks during a press conference in Ottawa on May 3. Standing behind him are Journalist Mohamed Fahmy and Amnesty International Canada Secretary General Alex Neve. (The Canadian Press/Adrian Wyld)
Canada

OTTAWA—A prominent Canadian victim of abuse behind bars in Syria is calling on the government to cancel controversial directives that allow for the sharing of intelligence that could lead to torture.

Abdullah Almalki, a Canadian who was imprisoned and tortured in Syria for almost two years, said Tuesday, May 3, it is time the Liberals ditched the policy that was enacted by the previous Conservative government.

At a press conference in Ottawa, Almalki said the current government must end Canada’s “previous complicity in torture.”

The Liberals say they are reviewing the directives as part of a broader security review.

Almalki and other human rights activists said cancelling the directives is the next logical step for the government after it announced Monday it was prepared to join a key United Nations anti-torture agreement more than a decade after it was first passed.

Almalki was part of a group of human rights activists that praised Monday’s surprise announcement by Foreign Affairs Minister Stephane Dion. But they said the government must go further, and cancel the torture directives.

Almalki and other human rights activists said cancelling the directives is the next logical step for the government.

“Many of the prisoners I’ve interviewed have reverted to saying things that necessarily didn’t happen or they were told to confess in order to avoid the torture,” said Mohamed Fahmy, the Canadian journalist who was imprisoned in Egypt.

Alex Neve, the head of Amnesty International Canada, said his organization has been campaigning for years to get the controversial torture directives thrown out.

“It certainly would be very much in keeping with the spirit of what we heard yesterday … to rescind that very troubling ministerial direction and bring our intelligence sharing practices into line with our international obligations,” said Neve.

Fahmy had warned Dion and the provinces not to dither and to bring Canada into full compliance with the anti-torture convention within one year.

The federal government must now consult with the provinces on the legal way forward for Canada to formally join the U.N. anti-torture convention.