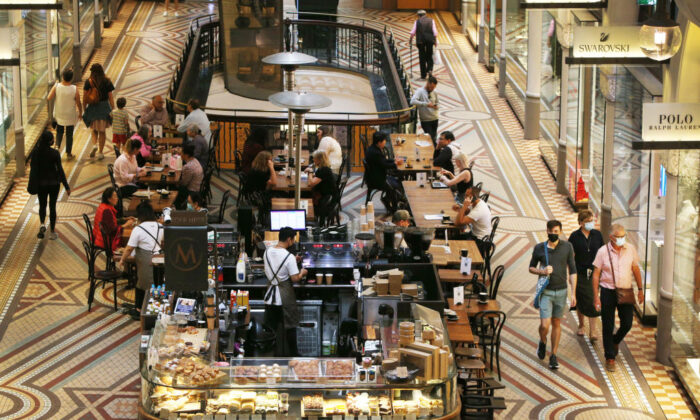 Former Commonwealth Treasury official Gene Tunny says the federal government must cut spending to have any chance of reining in inflation.

Tunny, now-director of Adept Economics, says multiple factors contributed to Australia’s current inflation rate of 5.1 percent—likely to be higher at the next announcement—including the war in Ukraine and billions in COVID-19 era subsidies.

The decision by Australian state governments to adopt harsh lockdown policies spurred the federal government to inject billions into the economy to keep families and businesses afloat, including the $89 billion (US$60 billion) JobKeeper, a fortnightly payment to businesses and sole traders.

“That was always going to have an inflationary effect because you’re increasing the amount of money, but you’re not increasing the productive capacity of the economy by the same proportion. Hence, you have too much money chasing too few goods,” Tunny told The Epoch Times.

“That sort of thing was always going to end up with some inflationary impact. So we were starting to see that before the war in Ukraine and now, the war has amplified that.”

“The tragic events in Ukraine have led to sharp increases in the prices of food and energy. And interest rates are rising around the world from the record lows during the pandemic,” he said during an address to the American Chamber of Commerce in Australia.

“All this is happening at a time when unemployment rates are as low as they have been for many decades and household budgets are under pressure. So, it is a complex policy environment.”

The Reserve Bank has attempted to control inflation through raising interest rates, with ANZ Bank now predicting the official cash rate could hit 3.35 percent by the end of 2022—adding several hundred in monthly mortgage repayments.

Pledge to Reduce the Budget Deficit

“The Australian government is still running a budget deficit worth tens of billions of dollars—that’s actually contributing to inflationary pressure.”

He said the government’s support for a minimum wage increase in line with inflation—five percent—was a step in the wrong direction.

“We want to make sure we don’t get into that wage-price spiral where you have prices rise and then wages rise to catch up, and then some employers who cannot afford the wage rise passes it on and increases prices.”

However, Treasurer Jim Chalmers has stated that wage increases did not contribute to rising inflation.

“It is broadly accepted—certainly among independent, objective observers of the Australian economy—that wages aren’t the problem when it comes to the issues that we are confronting,” he told reporters on July 18.

“If you think about the consequences of those rising interest rates on the budget, more than a billion dollars this year, more than $5 billion in the last year … these are not small amounts of money,” he said.

So far Chalmers has ruled out continuing cuts to the fuel excise (22 cents per litre) beyond its end date of September saying it was too costly.

However, the treasurer may face pressure against the move with Australians still facing cost of living pressures on several fronts including higher petrol, electricity, gas, and grocery prices.

In fact, earlier in the week, Prime Minister Anthony Albanese backed down from an earlier pledge not to extend leave payments for workers needing to isolate after contracting COVID-19—after pressure from the state leaders.

The program, which was due to expire, will now be extended until September 30 at a cost of $780 million (US$530 million).

“All of the states and territories, as well as the Commonwealth, understand that emergency payments are just that. They can’t continue forever given the fiscal constraints that are on governments at all levels, but that this is an appropriate measure going forward,” Albanese told reporters on July 16.