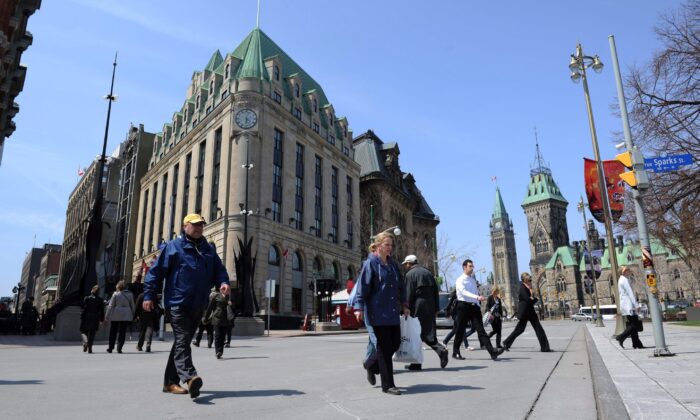 Pedestrians cross Elgin Street in view of the Peace Tower on Parliament Hill in Ottawa, in a file photo. (The Canadian Press/Sean Kilpatrick)
Viewpoints

When a government wants to make a radical or controversial policy shift, it rarely will dive right into it. It will test the waters of public support using legislative tools to float trial balloons while maintaining the illusion that it has a degree of separation from the proponent of the policy.

The federal government is doing this right now as they try to lay the groundwork and build public support for a universal basic income (UBI) scheme.

Almost 80 percent of the delegates at the Liberal Party of Canada’s policy convention in April 2021 voted in favour of establishing a UBI plan. The party clearly wants that policy, but they still aren’t sure how they will get there. That’s why we are seeing the trial balloons.

The Liberals first tested the waters of a UBI scheme with Bill C-273, which Liberal MP Julie Dzerowicz tabled as a private members’ bill. Private members’ bills rarely pass. When a government member tables such a bill, it means they want to explore a concept but be able to distance themselves from it if there is a public backlash. Dzerowicz’s bill predictably died on the order paper when the federal election was called in August. It had served its purpose in breaking the ice on the issue and starting discussions.

Now the Liberals have moved on to promoting the concept of a UBI system through Bill S-233. Bill-S-233 is a “Senate public bill” which is pretty much the Senate’s version of a private members’ bill. The bill is very unlikely ever to pass as it has to go through multiple readings, a terribly slow committee process, and would eventually end up in the House of Commons.

The bill was sponsored by Sen. Kim Pate. While the Liberal government likes to keep up a façade of independence among the senators, Liberal-appointed senators still follow party guidance, even if unofficially. Sen. Pate was appointed to the Senate on the recommendation of Justin Trudeau in 2016. If you think she tabled Bill S-233 without direction from the Liberal party, I have a bridge I would like to sell you.

An NDP private members’ bill calling for a UBI scheme is making its way through the House of Commons right now as well. It will never make it to final reading, but considering NDP Leader Jagmeet Singh’s rather cozy relationship with Trudeau, it doesn’t defy belief that the parties are at least loosely partnered on the concept of bringing in some form of UBI.

The pitch and failure of these UBI bills is by design. With every “independent” bill that comes and goes, the Liberals have opened the door a little further for the imposition of a true UBI program. People are becoming desensitized to the concept.

Aside from a lack of widespread public support for UBI, the Liberals face the challenge of finding a way to fund a program that would come with such a staggering bill. The CERB program cost Canadians over $75 billion in its first year and that program is much smaller than what a UBI scheme would be. The Liberals desperately need a large new source of revenue if they want to bring in a program as massive as UBI.

It may or may not be related, but the Liberals continued flirtation with the concept of an equity tax on primary residences would give the government a sudden influx of income if they taxed homeowners on their hard-earned equity. Much like with the UBI concept, the Liberals keep floating the idea but instead of using private members’ bills as their tool, they have been using the Canadian Mortgage and Housing Corporation (CMHC).

The CMHC answers directly to the federal government and it seems as if hardly a year goes by without the CMHC commissioning a study into home equity taxes, then backing off when exposed. Much like with the UBI concept, the Liberals dearly want to tax home equity, but they know they haven’t softened Canadians up to the concept enough to go there yet.

Should Canadians be worried about the current bill before the senate? Yes and no. Bill S-233 will never become legislation but it is certainly a stepping stone towards it. The bill wasn’t created and tabled with just the goal of talking about UBI and then forgetting about it.

Justin Trudeau is an ideologically driven prime minister and he has hit the point in his career where he will be seeking a permanent legacy. Implementing a UBI program could certainly be that legacy and it has party support. The subject just keeps coming up and where there is smoke, there is fire. A formal government pitch for a UBI scheme is likely a matter of time now.