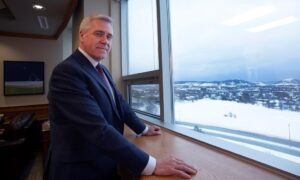 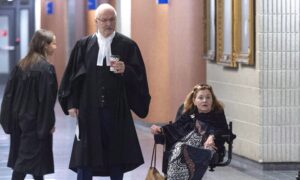 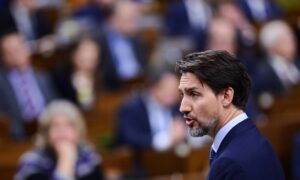 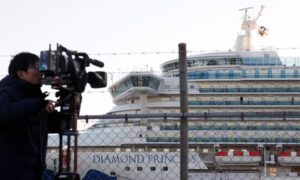 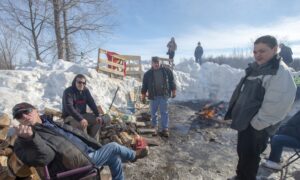 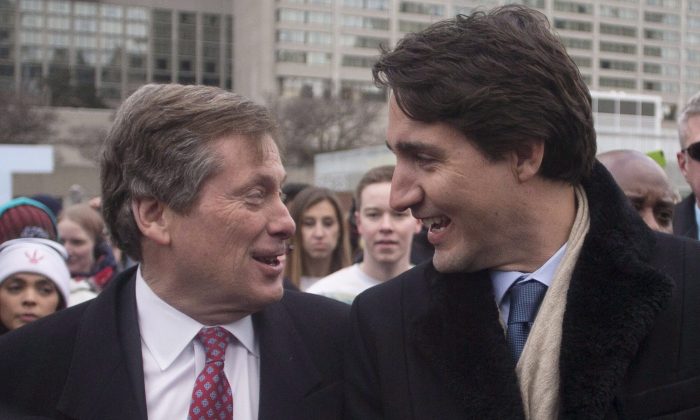 Prime Minister Justin Trudeau is greeted by Toronto Mayor John Tory outside Toronto's city hall on Jan. 13, 2106. The federal government is considering speeding up infrastructure spending in a bid to stimulate the economy. (THE CANADIAN PRESS/Chris Young)
Canada

Infrastructure investment part of the solution to the challenges Canada is facing, Trudeau says
By The Canadian Press
FONT BFONT SText size
Print

Prime Minister Justin Trudeau promised during last fall’s election campaign to pump an additional $60 billion over 10 years into infrastructure projects. But less than half that money—$17.4 billion—was earmarked to flow during the Liberals’ first mandate.

However, The Canadian Press has learned the government is now looking at moving up the spending schedule, pushing the money out faster in response to worsening economic conditions.

Commodity prices have continued to slide, the dollar has nosedived, and already sluggish economic growth has slowed to a crawl in the three months since Trudeau won on a platform focused on stimulating the economy and improving the lot of middle-class Canadians.

Asked on Wednesday, Jan. 13, whether the government is considering spending more than the promised $5 billion extra on infrastructure in the coming year, Finance Minister Bill Morneau did not rule out the idea, but said details will have to await his maiden budget, expected in mid- to late March.

“It will include significant infrastructure spending, but the exact details of the budget we haven’t completed yet so I can’t provide more information on the exact numbers,” he said during a visit to a Toronto refugee centre.

The deteriorating economic situation has already forced the Liberals to rethink their pledge to run up deficits of no more than $10 billion in each of the first three years of their mandate. Trudeau has downgraded that promise to a “goal.”

While they may yet have to scale back some of their other pricey campaign promises, Trudeau and Morneau have doubled down on the infrastructure spending, arguing that the worsening economic picture only reinforces the need to stimulate growth.

During an event the same day with Toronto Mayor John Tory, Trudeau said his government has no plans to scale back its infrastructure spending.

“The infrastructure investments that the mayor is counting on are not a problem—they are part of the solution to the challenges that Canada has been facing,” he said.

Spending ‘on the right things’

Sources say the Liberals are looking at speeding up infrastructure spending— “actively considering” it, in the words of one insider—but they want to ensure additional money doesn’t wind up paying for gazebos, park upgrades, and other beautification projects of the sort that were funded in Ontario’s cottage country prior to the 2010 G8 summit.

Trudeau said Wednesday that his government wants to make sure it’s spending money “on the right things” to create jobs and spur the economy in the short term, but also in the long run.

“We have billions of dollars that we have not spent over the last two years that we can expedite this year and next year, as well as going through the budget process to allocate the additional $60 billion,” he said.

Sohi has said funding will flow to shovel-ready projects that cities and provinces identify as priorities.

He said the government is asking cities and provinces to finalize the list of priority projects so they can be quickly reviewed and green-lighted for funding. Those projects, he said, need not be new work, but could be revamping of existing infrastructure.

“If we can do things more quickly in those areas, those are the things that we are also going to be looking at,” he said.

Some critics have already questioned how the Liberals will find enough worthwhile, shovel-ready projects on which to spend the $5 billion promised for infrastructure this year, much less any additional money. Still others have wondered whether the Liberals should loosen their restrictions to spread the new cash equally between transit, “green” projects, and “social” infrastructure.

Those kind of details will be finalized after consultations with provinces and cities, Sohi said.