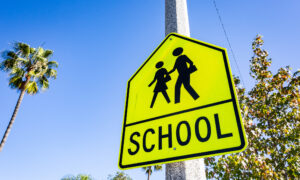 A wildfire that grew quickly on Government Island near Portland on Monday afternoon was 100 percent contained around 6 p.m.

The wildfire forced evacuations of a ranch/farm on the island, which is northeast of Portland, as well as campers and boaters. It also slowed traffic on I-205, runs over the island on the Glenn L. Jackson Memorial Bridge, in both directions.

“This is a logistically not the easiest situation for us,” said Chatman. “We have to get all the firefighters and their equipment on boats.”

The Portland Fire Bureau said at 5:42 p.m. PDT that the fire is mostly contained, although there is still “residual traffic issues on many freeways.”

About 80 personnel are battling the fire.

The Portland Airport, which is near the island, was not impacted.

Government Island is a 1,760-acre island northeast of Portland between Portland and Vancouver. It’s only accessible by boat, according to the Oregon Parks Department. The 15 miles of shoreline at the park is popular with fisherman, while camping is permitted on some areas. The interior, accessible by permit only, is used as a cattle ranch and has protected natural areas.