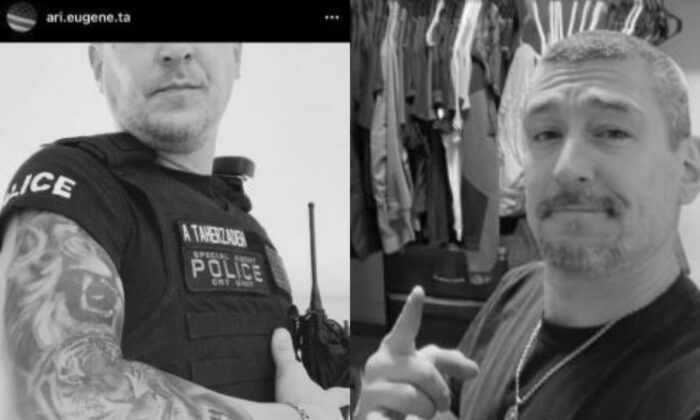 In undated photographs, Arian Taherzadeh poses wearing police vest (L) and in his apartment with firearms and police gear. (DOJ via The Epoch Times)
Crime and Incidents

Two men who allegedly lavished gifts on Secret Service agents and posed as agents themselves are accusing the U.S. government of hyping what actually happened as they seek their release from detention.

One of the men, Haider Ali, is also saying that he had little to do with the operation, with a lawyer suggesting he was duped in a similar way as the actual agents.

Prosecutors allege Arian Taherzadeh and Ali posed as federal officers to get close to the agents, with Taherzadeh lavishing agents and a Department of Homeland Security worker with rent-free apartments, iPhones, law enforcement paraphernalia, and other items.

Four members of the Secret Service have been placed on leave, pending further investigation.

While prosecutors are attempting to keep Taherzadeh and Ali detained until trial, the defendants launched separate efforts on April 11 to be freed.

Taherzadeh, through his lawyers, said the crime of impersonating a federal officer is not a crime of violence and alleged the government has not demonstrated that Taherzadeh cannot be safely released.

“Mr. Taherzadeh is eligible for placement into HISP and his father would be an appropriate third party custodian. Appropriate conditions would include a restriction that he not possess any firearms or ammunition; that he be monitored on location monitoring; that he stay away from the location where the search warrant was executed; that he reside with his father in Sterling, VA, and remain within a 50 mile radius of that address absent prior approval by pretrial services; that he avoid all contact, directly or indirectly with any person who may be a victim or witness in this case, including his co-defendant, except through counsel; and that he submit to the supervision of the Pretrial Services office as directed,” the lawyers said in a filing.

“Mr. Taherzadeh agrees to abide by these and any other conditions the Court believes necessary to reasonably ensure the safety of the community,” they added.

The defendant is relying in part on the Bail Reform Act, which made it easier for some people accused of crimes to avoid pre-trial detention.

Because of his newfound notoriety—many articles about the alleged crimes have included not only Taherzadeh’s name, but his pictures—even if he were released, he could no longer impersonate a federal agent, the man’s lawyers said.

A hint of the upcoming defense was also included in the filing.

Taherzadeh lavished gifts on the federal officers because he had a “genuine friendship” with them, the lawyers said, adding, “He never asked for anything from the officers he befriended, never gave them anything for the purpose of gaining something in response, and deeply regrets his involvement in this matter.”

Ali, meanwhile, suggested through his counsel that he had little to do with Taherzadeh besides being an employee at a company Taherzadeh owns called United Special Police LLC.

While the government says Ali helped maintain and control a penthouse with his co-defendant, the link is thinly supported, according to an opposition memorandum from the lawyers.

“Inside was the Glock owned by Ali but which was admittedly being used and carried by Taherzadeh. Many other items found inside lack any stated link to Mr. Ali at all. The only items arguably linked are ‘passport photos of what appears to be Ali’ (emphasis added), unspecified ‘miscellaneous mail and documents associated with Taherzadeh and Ali’ (emphasis added), and a Jiffy Lube invoice for a Chevy Impala, referencing ‘James Haider.’ The government attempts to make much of the latter, but we urge the court to look at that invoice more closely: The car is listed as part of a fleet, and the ‘Authorizer Name’ is ‘Fay Tate.’ ‘James Haider’ is merely referenced under ‘Driver Name,'” they said.

Ali does live in an apartment in the building, but what was seized from there was noted in a single line: laptop computers, flash drivers, a U.S. Postal Service badge, and police lights that can be installed in a vehicle.

The “paucity of detention evidence” may be why the government pivoted to emphasizing Ali’s travel records, lawyers for Ali, who does, in fact, work for the Postal Service, said.

Ali did travel to Iran, Iraq, Pakistan, and Egypt in recent years, but did so because his faith’s major religious buildings are there, according to his counsel.

Both filings came after the government urged Magistrate Judge G. Michael Harvey, the judge overseeing the case, to keep Taherzadeh and Ali detained, arguing they pose a danger to the community.

“Furthermore, Ali’s overseas travel to the Middle East, coupled with his claim to one witness that he has a connection to the Pakistani foreign intelligence service, establish that he poses a serious risk of risk of flight,” prosecutors said in one filing, “and Taherzadeh’s efforts to destroy evidence of his involvement in the impersonation scheme after realizing he was under investigation establishes that he poses a serious risk of obstructing justice.”

After a hearing on the motion for detention was held on April 8, prosecutors lodged updated entries with the court, claiming that the case against the pair has only gotten worse.

Both Taherzadeh and Ali applied to work as armed special police officers and were rejected, the government said in one document. Additionally, ammunition magazines seized from guns believed to belong to the men were illegal, high-capacity magazines. And Taherzadeh was “tipped off” about the investigation, leading to either he or Ali appearing to have moved to conceal evidence, “including by trying to corruptly enlist the help of a federal law enforcement agent,” the government said.

“Because of the breakneck pace of the investigation, there are many facts that we still do not know. But the facts that we do know about the defendants—that they lied about their identities for years, stored a cache of weapons and surveillance equipment in their apartments, compromised law enforcement agents in sensitive positions, and tried to cover up their crimes—leave no doubt that their release poses a public safety risk,” prosecutors added. “Both defendants should be detained.”

Correction: A previous version of this article inaccurately stated the men’s nationalities. They are American citizens. The Epoch Times regrets the error.