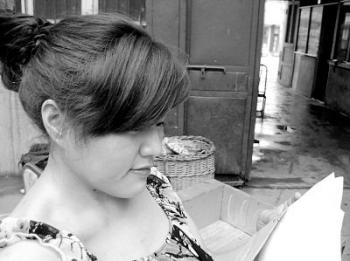 Chen Yilian
View profile
Follow
biggersmaller
Print
Liang Yijing was 22 years old when her father was first imprisoned for petitioning against local government corruption in 2005. After an expensive lawsuit and numerous illegal jailings, Liang decided to take her case to the Internet. Since then, their lives took a turn for the better, when she became among the top 10 Internet celebrities in China. Liang tells The Epoch Times about her transition from an ordinary post-80s generation girl to an anti-corruption Internet blogger.

It all started in 1992, when an enterprise founded by the Gaolou Township government in Lingbi County borrowed money a number of times from the Liang family. They borrowed a total of 240,000 yuan (approximately US$35,432), wrote a promissory note, and promised to pay it back with interest. However, after a few years of delay, the town government changed leaders and refused to pay the debt, saying that the enterprise was bankrupt.

Liang Yijing says that the amount of money that they lent was trivial to the lawsuit expenses of over one million yuan (US$147,634) they’ve spent over the past 15 years. So why did they continue with the lawsuit?

“When we asked them to pay the debt, they refused in a vile manner. We weren’t going to give in, so we sued them. As the situation intensified, my father’s business experienced financial losses and my parents divorced. However, all this is unimportant; we just want justice.”

Since 1995, Liang Maorong has been active in seeking justice. He was detained in 2005 the first time he petitioned in Beijing, and was arrested three times that year. In July 2006, he was sentenced to forced labor for the first time and was sent to the Bangbu Forced Labor Camp in Anhui Province.

After that, Liang Yijing concluded that the government detained her father because they were afraid of petitioners, so she also became a petitioner. A week after she set out to petition in Beijing, she was sent home by petition “interceptors.”

Two months later, she went to Bangbu to visit her father, and then petitioned while she worked in Beijing. Another three months later, her father called from home. It turned out that the provincial forced labor committee had rescinded the sentence and indemnified her father for forced labor detention. The family was delighted, believing this proved their petitioning was legal. In addition, her father also received more than 10,000 yuan (US$1,476) from the government in compensation for the 100-plus days he had spent in the forced labor camp.

After her father returned, Liang continued to petition in place of her father. However, she was brought back to Lingbi from Beijing on Dec. 25, 2006, and detained for seven days for “disrupting order” while petitioning in Beijing. Not long after, her father was detained at the reeducation center of the County Party School. She went to visit him, was detained as well, and was not released until a month later after four days of a hunger strike. Her father was then freed when he tried to bang his head against a wall.

On April 8, 2007, her father was sent to a forced labor camp again. In the past few years, he had been detained eight times and sentenced to forced labor three times for petitioning.

Out of desperation, Liang submitted posts to China’s public Internet forums such as Sina, Phoenix, Tianya, and Tencent, hoping to raise public awareness. However, the website moderators deleted her posts, deeming them overly radical.

She then submitted a post called, “Searching for Internet Promoter.” Though her posts were not entertaining and lacked selling points, she persisted. Internet users gave her many suggestions to arouse public interest, such as posting nude photos or pretending to jump off a building. But Liang has refused to take their suggestions, saying, “I don’t like vulgar things. I want to appear righteous and solemn.” By continuing to submit online posts, this “anti-corruption blogger” was voted as one of the top 10 Internet celebrities of 2007.

Praying to Heaven for a Blessing

Despite her rise to fame, Liang’s father’s case has not been resolved. In April 2010, he was detained again and sentenced to 18 months of forced labor for the third time. Liang Yijing again appealed to the Anhui forced labor committee. On June 25, 2010, Liang Maorong’s sentence was rescinded because of “obvious inappropriate administration.” For all three times that her father had been detained, Liang Yijing was able to save her father from forced labor through her appeal.

Liang Yijing remains calm about her victory, attributing success to the influence of public opinion. She believes that the future will still hold complications and is concerned about her father’s health. She worries that he may encounter mishap while on the path of defending his rights.

“Anything can happen when there is unrestrained political power. I’m worried that my parents will be the victims of retaliation. However, I will pray to heaven for a blessing.”