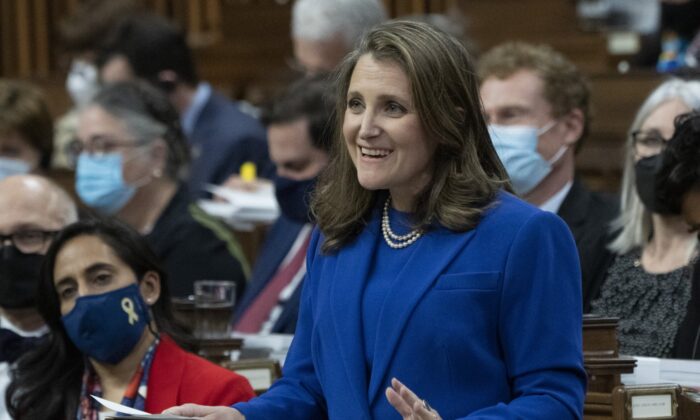 Deputy Prime Minister and Finance Minister Chrystia Freeland smiles as she delivers the federal budget in the House of Commons, April 7, 2022 in Ottawa. (The Canadian Press/Adrian Wyld)
Canada

A new analysis of government finances across the country says revenues were much stronger than expected in the last year due to higher inflation and economic growth.

The analysis by Desjardins found spending was more mixed, but pandemic-related expenditures were generally lower than anticipated.

As a result, the financial services company says, federal and provincial governments all saw an improvement in their 2021-22 deficit estimates and starting points for the rest of their fiscal forecast.

However, Desjardins found that what governments did with this fiscal windfall varied greatly.

Some chose to set a portion of it aside for a rainy day, while others spent it all.

Desjardins expects economic activity to be weaker than most governments project for next year and beyond.

That means some governments could be in a more challenging fiscal situation than they anticipated when they published recent fiscal plans.

“Spending also came in lower than expected, albeit more modestly, particularly in those areas most closely linked to the economy such as COVID-19-related measures.”

As a result of the economic tailwind, budget deficits in the 2021-22 fiscal year are now universally expected be smaller than initially expected during the 2021 budget season.

Some provinces, such as Alberta, Quebec and New Brunswick, plan to run operating surpluses layered on top of contingencies for risk and savings.

Others, like Manitoba, Saskatchewan, and Newfoundland and Labrador, intend to run smaller deficits in 2022-23 compared with the previous fiscal year. These deficits are divided between financing for operating deficits and capital investments.

Finally, Ontario, B.C., Nova Scotia and P.E.I. all plan larger budget deficits as a share of GDP this year than in the 2021-22 fiscal year, leading to an increasing net debt-to-GDP ratio, Desjardins says.

In the context of total public debt, Canada has the lowest net debt-to-GDP ratio in the G7, the analysis notes. “And while higher than prior to the pandemic, Canada’s total government debt position continues to compare very well to other major advanced economies.”

This was reinforced when Standard & Poor’s reaffirmed the Government of Canada’s AAA credit rating with a stable outlook at the end of April 2022, the analysis says.