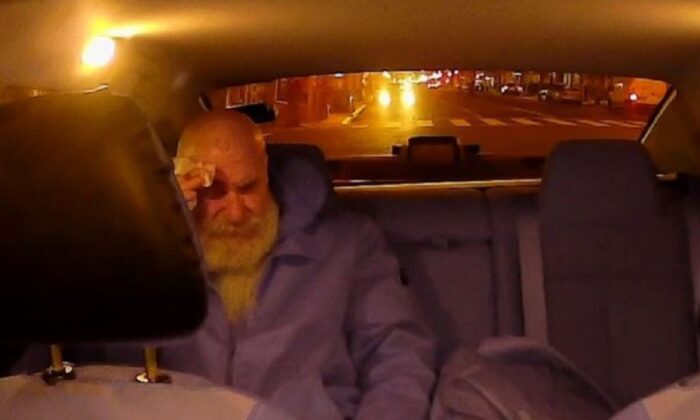 A man authorities identified as Jerry Braun rides in an Uber in Washington on Jan. 6, 2021. (DOJ via The Epoch Times)
Crime and Incidents

Government Charges Man Who Allegedly Boasted About Jan. 6 to His Uber Driver

A man who prosecutors say bragged about the Jan. 6, 2021, breach of the U.S. Capitol to his Uber driver was arrested and charged this month with three counts related to the breach.

Jerry Braun was charged on April 7 with obstruction during civil disorder, violent entry or disorderly conduct, and entering and remaining in a building.

Braun, arrested on April 12, faces up to six years and six months in prison if convicted.

According to charging documents unsealed on April 19, an Uber driver reported picking up a passenger named Jerry about 1 mile away from the Capitol at approximately 7:05 p.m. on the day of the breach. The man was bleeding near his right eye, which appeared injured.

A video recording of the ride obtained by the FBI showed the driver asking Braun about violence at the Capitol.

“Well, it started around, right when I got there. I tore down the barricades,” the passenger said, according to the FBI.

“You did? Why?” the driver wondered.

“Well, because, so we could get to the Capitol,” the passenger said.

“Well, how’d that work out for you?” the driver asked.

“Well, it looks like, uh, Biden’s gonna be our president,” Braun said.

The breach occurred while Congress was certifying the electoral votes for the 2020 presidential election. Joe Biden was sworn in as president on Jan. 20, 2021.

Federal officers later found records of a JD Braun checking in to a nearby Holiday Inn on Jan. 5, 2021, and checking out on Jan. 7, 2021. A comparison of the California driver’s license used during the check-in and the Uber passenger revealed a positive match, according to the FBI.

Agents also found images of Braun on Jan. 6, including one where his pocket held a paper that listed the website www.shotgunshock.com, which online records showed was associated with the Uber account for Braun and a phone number with a listed contact name of Jerry Braun.

Body camera footage from Metropolitan Police Officers at the capitol showed a man identified as Braun pulling a barricade from officers on Capitol grounds and, at one point, holding a long wooden plank. Braun was captured striking multiple times a person with a helmet emblazoned with “press.”

Braun told officers who executed a search warrant at his home in South El Monte, California, on Nov. 8, 2021, that he was part of the Capitol breach. Asked what he was guilty of, Braun said, “everything,” according to the FBI.

Text messages from Braun’s phone showed he sent a message several days before the breach relating that he was going to fly to Washington for a rally, and that he was shopping for body armor. In a selfie photograph sent after the breach showing Braun’s injured face, Braun texted “souvenir from DC.”

“Occupied the capitol,” Braun wrote in another text, sent on Jan. 11, 2021. He shared a video that showed people clashing with law enforcement officers.

According to the texts and footage, Braun did not appear to go inside the Capitol building.

Braun’s lawyer told The Epoch Times in an email that neither he nor his client have a comment on the charges at this time.

The defendant was released on personal recognizance after a hearing on April 19.

A Department of Justice spokesman declined to comment on the case, including why it took over 13 months to charge Braun. Uber did not return an inquiry.

As of April, prosecutors have charged nearly 800 people in nearly all 50 states with crimes related to the breach.