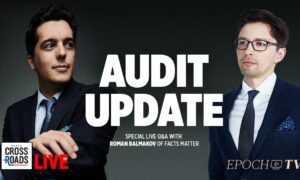 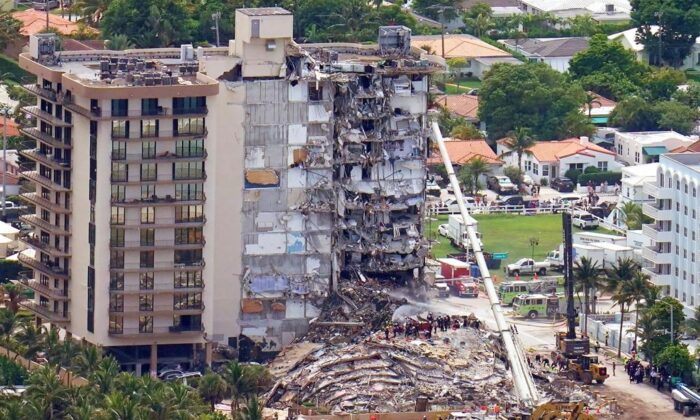 Workers search in the rubble at the Champlain Towers South Condo in Surfside, Fla., on June 26, 2021. (Gerald Herbert/AP Photo)
Florida

Twenty-four Miami-Dade apartment complexes, including two owned by the county, were found to have unsafe violations following an emergency audit of the area that was authorized after a condominium building partially collapsed last week.

The two-dozen buildings appeared on a list released late on Monday by the Miami-Dade government, reported the Miami Herald. According to the list, the two buildings owned by the county include the Little River Plaza, an 86-unit public housing complex that was built in 1970, and Ward Tower 1, a complex that was constructed around the same time.

The audit found that Little River Plaza was cited in 2015 for needing lighting improvements in its parking lot, while Ward Tower 1 was hit with a recertification violation in March, according to the Herald.

A spokesperson for the Miami-Dade government told The Epoch Times Wednesday that some of the “reasons buildings can be under enforcement with the Unsafe Structures unit includes many issues not related to structural safety concerns—such as parking lot illumination concerns or egress lighting.”

Local government officials claimed that building code issues have cropped up due to a lack of federal funding. Michael Liu, the housing director for the county, told the newspaper that the area is about $10 million short, forcing his agency “to make difficult choices based on severity and threats to health and safety.”

The findings were revealed after Miami-Dade County Mayor Daniella Levine Cava ordered an audit of the area’s buildings after the collapse of the Champlain Towers South, which has left at least 11 people dead and scores more missing. The Champlain Towers South was flagged in 2018 by an engineering firm over “major structural damage.”

The county requires buildings to undergo recertification starting at the 40-year mark and every 10 years thereafter. The Champlain Towers South was built in 1981.

In a statement over the weekend, the Miami-Dade government announced that its Department of Regulatory and Economic Resources “will conduct an audit of residential properties of five stories or higher at the recertification point–40 years or older–that have not completed the process.”

“The audit will start immediately and will be completed within 30 days,” the Miami-Dade government added in the statement. “For any buildings located within municipalities, the Mayor urges cities to swiftly conduct their own similar audits. The County will work closely with municipalities and provide any technical assistance necessary to conduct these audits.”

On Monday night, meanwhile, officials announced that the death toll now stands at 11 and around 150 people remain unaccounted for.

Family members of those inside the building “have them coping with the news that they might not have their loved ones come out alive and still hope against hope that they will,” Levine Cara said in a news conference. “They’re learning that some of their loved ones will come out as body parts. This is the kind of information that is just excruciating for everyone.”