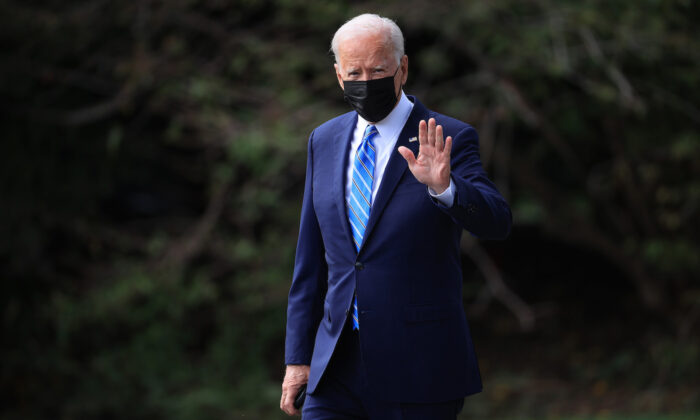 U.S. President Joe Biden walks across the South Lawn as he leaves the White House on Oct. 7, 2021, in Washington, DC. Biden was traveling to the Chicago area to promote his Build Back Better agenda while also encouraging employers have their employees vaccinated. (Chip Somodevilla/Getty Images)
Policies & Impacts

Government assistance programs and policies are contributing to the decline in employment activity among able-bodied Americans, according to a new study by the Joint Economic Committee (JEC) Republicans.

The study, titled, “Reconnecting Americans to the Benefits of Work,” published on Wednesday, seeks to understand why fewer prime-age Americans are part of the nation’s workforce.

While noting that declining wages, technological change, and international trade all play a part in the decline in employment activity among able-bodied Americans, JEC Republicans said that “government programs and policies have likely made work less attractive for these Americans.”

The study found that the United States has experienced an unprecedented rise in disconnected prime-age workers over time.

For men, this trend dates back half a century, with their labor force participation rate falling from over 97 percent in 1955 to 89 percent before the pandemic. For women, receding workforce participation began in the last two decades.

The decline in prime-age labor force participation has been mostly voluntary, the study notes, with just 12 percent of inactive, prime-age, able-bodied men stating that they wanted a job or were open to work. Among men who said they are not working due to reasons other than disability, retirement, education, or homemaking, 41 percent personally receive government assistance.

“If more men are genuinely choosing to stay home with the kids, go to school, or retire early, policymakers should not be concerned. However, government policies may be tipping the scales toward inactivity and away from work,” the study notes.

“Policymakers should take note if would-be workers’ inactivity is indeed enabled or encouraged by poorly structured government benefits or made more likely by unnecessary barriers to work,” it adds. “This is likely the case for the 41 percent of primeage men who personally receive government assistance and are inactive for reasons other than disability, retirement, education, or homemaking.”

“The share of working-age Americans living in households between the 20th and 50th income percentiles who receive safety net benefits increased from 20 percent to about 30 percent between 1998 and 2014. This growth in safety net benefits likely makes non-work more attractive and has contributed to declining labor force participation,” they wrote.

The study noted a decline in labor force participation and earnings after government assistance programs such as housing assurance, Medicaid, and the introduction of the food stamp program in the 1960s and 1970s.

The study focuses on multiple government assistance programs in the time period before Congress passed three massive stimulus packages in an effort to support the economy and help Americans through the COVID-19 pandemic.

Additional government spending is currently being pushed by the Biden administration, which has said it has secured a new $1.75 trillion Build Back Better Act framework for economic and climate change spending that has yet to pass the Senate.

The bill is a revised and reduced version of the $3.5 trillion social spending bill unveiled at the beginning of the year that was blocked by key moderate Democrats who refused to allow such an increase to the national debt.

The new stimulus package has been praised by Democrats such as Sen. Tammy Baldwin, (D-Wis.) for helping working Americans get back on their feet.

But further stimulus support has also been criticized by Republicans including Sen. Mike Lee (R-Utah), the ranking member of the JEC Republicans.

“As the number of Americans who receive government assistance has grown, more Americans have voluntarily left their jobs,” Lee said in a statement to Fox News. “Congress’ plan to spend an additional $3.5 trillion to provide households with new subsidies and fewer incentives to work would only make things worse.”

JEC Republicans suggest approaching the current declining employment situation with a three-pronged approach: removing barriers to work such as burdensome regulations, removing financial disincentives to work such as those in social-safety net programs, and bolstering incentives and increasing the attractiveness to work, such as a government-funded wage subsidy to increase workers’ take-home pay.

“Reconnecting inactive workers to the labor force will require careful consideration of poorly-designed federal benefits, wide-ranging regulations that exclude would-be workers from the labor market, and labor laws that restrict employee freedoms to work on their own terms,” the study says.

“Ultimately, work is a means of promoting wellbeing, not an end in itself. Improving connections to work and increasing the attractiveness of work, particularly among those most at risk for idleness or isolation, can significantly improve the economic, social, and mental well-being of disconnected Americans.”