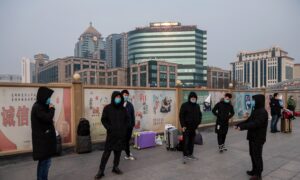 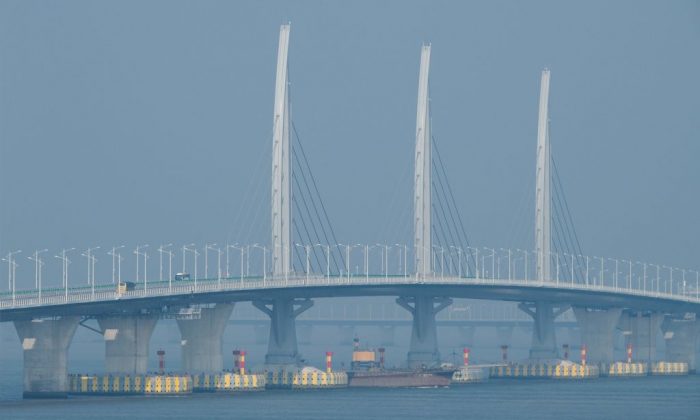 A Chinese media blitz has promoted the recent official opening of a bridge connecting Hong Kong, Macau, and the southern Chinese city of Zhuhai as a sign of China’s accomplishments in technological innovation, given the sheer number of patents filed during the bridge’s construction.

But those patents were made possible through heavy government support.

The bridge, which took 14 years to build, produced over 400 patents, according to an Oct. 25 report by Chinese newspaper Southern Metropolis Daily.

In the province of Guangdong alone, where Zhuhai is located, about 536,100 patent applications were filed and 314,300 patents were issued in the first eight months of this year, which are increases of about 38 and 55 percent, respectively, from the same period last year. About 148,200 of those applications were related to invention patents, while 35,800 of the patents issued were for inventions, increases of almost 41 percent and about 25 percent, respectively, from the same period a year ago.

In China, there are three different types of patents: invention patents, utility models, and design patents. Invention patents, as the name suggests, are patents awarded for inventions, including process and concepts, that represent a notable progress in technological advancement. Such patents, similar to the utility patent in the United States, has the longest application time (three to five years) and the highest application fee (about 3,400 yuan, or $489).

The second type is for utility models, which requires roughly a year before Chinese authorities decide whether an application is rejected or awarded. There is no equivalent in the United States. The shorter application period means that an innovation requires a lower degree of “inventiveness” in order to be awarded a patent.

Finally, the third type is the design patent, which is similar to U.S. design patents, whereby patents are awarded for a new physical appearance or new external features of a product.

For the year 2016, there were a total of 3.1279 million patent applications filed worldwide, among which about 43 percent, or about 1.338 million applications, were filed at China’s patent office. The United States was No. 2, with 605,571 applications filed, or about 19 percent of the global total, according to a 2017 report by the World Intellectual Property Organization (WIPO).

In fact, filing patents is part of Beijing’s agenda. Central authorities began to encourage companies and people to file for patents in 2006, as part of its 11th Five-Year Plan (2006 to 2010), according to Chinese news portal NetEase.

By holding a lot of patents, Beijing can dominate a certain sector so that foreign companies operate at a disadvantage when doing business inside China. One example is the Japanese retailer Muji, who lost a trademark lawsuit in 2017 in China because a Chinese company already held a trademark license for Muji’s name in Chinese.

Filing patents for key technologies also allows Chinese companies to profit off foreign firms, who must pay patent holders to use the licensed technology.

The “Made in China 2025” industrial plan, issued in May 2015, again emphasized patents as part of China’s strategy to not only become technically self-sufficient by 2025 in 10 key high-tech sectors, but ultimately dominate global supply chains.

The Made in China 2025 plan calls for “strengthening the effort in storing up intellectual property in core technologies of the manufacturing sector” and “building up industry-oriented, strategic patent portfolios,” according to China’s mouthpiece newspaper People’s Daily.

At an annual country-wide patent conference held in September 2017, Luo Wen, vice minister of China’s Ministry of Industry and Information Technology, reiterated the importance of filing patents in his speech. Luo called for a new level of “intellectual property work” in the manufacturing sector, through government “support for a coordinated research effort among companies, higher-education institutes, and research centers.”

In response to Beijing’s directive, regional governments have set their own policies to encourage companies to file for patents. The provincial government of eastern China’s Anhui Province, for example, announced a quota for 2007: Cities within the province must increase their annual number of patents by 30 percent compared from the year prior, according to China’s state-run media The Paper. To achieve the patent quota, municipal governments established a reward system, whereby they paid an unknown sum of money to companies whenever they filed a patent.

In an article published by the Chinese monthly magazine China Intellectual Property in 2010, You Mingian, a patent lawyer based in Shanghai, explained that the government patent-subsidy programs have resulted in many useless patents because companies didn’t intend to seek to protect their intellectual property rights—but merely sought to receive a government subsidy.

Taiwanese businessmen working in China saved money by getting a Chinese patent compared to a Taiwanese one—because the cost for filing and maintaining a patent would be covered by the subsidy from Chinese authorities, Taiwanese patent-law firm NAIPO said in a 2013 article published on its website.

A Sept. 27 Bloomberg article reported that many Chinese patents were dropped as their holders stopped paying for the fees to maintain them—a sign that many of the patents were useless.

NetEase, in an Oct. 21 article that indicated how some Chinese patents were for useless inventions, listed several examples. One patent was for the invention of a “happy vacuum machine”: a vacuum cleaner with an attached music player.