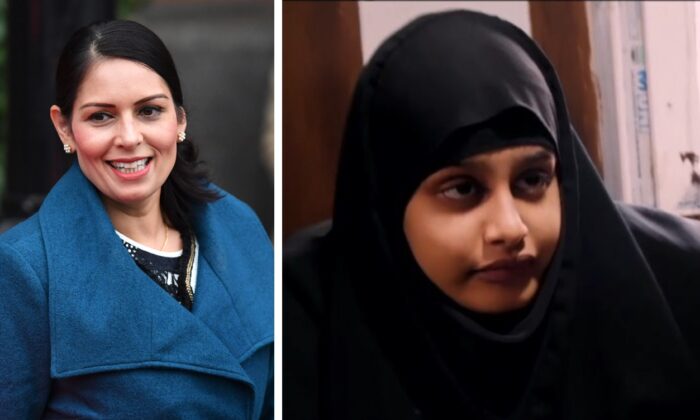 British authorities have doubled down on their insistence that jihadi bride Shamima Begum won’t be allowed to return to the UK, despite her pleas and complaints of failing mental health.

Begum, now 19, is the British-born teenager who ran away from home in 2015 to join the ISIS terrorist group in Syria. She remains stuck in a refugee camp run by Kurdish forces after the UK government revoked her citizenship on grounds that she poses a security threat.

In a recent interview with the Daily Mail, Begum pleaded to be allowed back into the UK and complained that her mental health was failing.

Priti Patel, Britain’s secretary of state for the Home Department, told The Sun on Sept. 29 that there was “no way” that Begum would be allowed back.

“Our job is to keep our country safe,” Patel said. “We don’t need people who have done harm and left our country to be part of a death cult and to perpetrate that ideology.

“We cannot have people who would do us harm allowed to enter our country—and that includes this woman.

“Everything I see in terms of security and intelligence, I am simply not willing to allow anybody who has been an active supporter or campaigner for ISIS in this country.”

Patel said that it’s “quite reassuring” that Begum is still in Syria.

Begum, one of three schoolgirls who left London in 2015 to join ISIS, surfaced in a refugee camp earlier this year in the wake of a U.S.-led offensive against the terror group’s final enclave in Baghuz, Syria.

She was recently tracked to another location called Camp Sunshine by Daily Mail reporter Richard Pendlebury.

She told him: “My mental health situation is not the best. My physical health is OK. I am still young and I do not get sick. That is not my problem. Mentally, though, I am in a really bad way.”

Begum has lived in several refugee camps since granting an interview to The Times of London from the al-Hawl camp in northeastern Syria in February, when she said: “I could not endure the suffering and hardship that staying on the battlefield involved. But I was also frightened that the child I am about to give birth to would die like my other children if I stayed on. So I fled the caliphate.”

She was pregnant at the time of the interview and later gave birth, but the baby died.

Speaking to reporters in al-Hawl in February, Begum said that while she didn’t agree with everything the terror group had done, she had “no regrets” about joining ISIS and suggested that airstrikes against the terror group in Syria somehow justified the 2017 Manchester Arena terror attack.

“It’s a two-way thing, really,” she told the BBC, adding that the suicide bombing that killed 22 people at an Ariana Grande concert in Manchester was a “kind of retaliation” for bombardments of ISIS-held enclaves, adding, “So I thought, OK, that is a fair justification.”

British authorities later rescinded her citizenship after determining she was a security threat.

She has since spoken critically about ISIS, expressed regret about joining the jihadi group, and acknowledged she had been “brainwashed.”

Speaking to The Times of London in the al-Roj refugee camp in Syria on April 1, Begum said, “I do regret having children in the caliphate,” and appealed to British authorities to be allowed to return to the UK.

“I came thinking it would be a place of belonging where I could raise a family safely,” Begum was cited by The Times of London as saying. “But it was not a place to have children.”

Now, speaking to the Daily Mail at Camp Sunshine, Begum said: “I need therapy to deal with my grief. It is so hard. I have lost all my children.”

She added: “There is no mental health provision. I have heard that in other camps there is psychiatric help, but not here.”

Begum told the Daily Mail she is at least thankful not to be at the al-Hawl camp with its tens of thousands of ISIS family members and sympathizers that has been described as a “ticking time bomb” of Islamism.

“I have no real friends,” Begum added. “I have lost all the friends who came with me. Now I do not have anyone.”