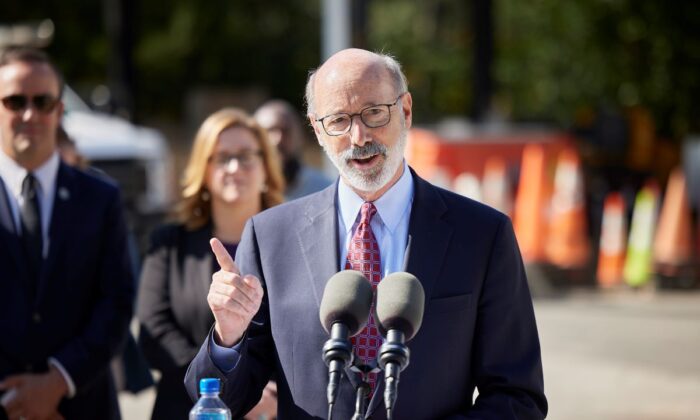 Vaccinated employees of the Commonwealth of Pennsylvania got an unexpected gift from Gov. Tom Wolf Monday: an additional paid five days off work.

Those who work under the governor’s jurisdiction get five extra paid days off if they are currently fully vaccinated or if they get fully vaccinated by Dec. 31. Employees must show proof of vaccination.

Time off must be taken between Dec. 20 and March 31. Employees who can’t squeeze time off into those dates will be given a lump sum for any unused bonus time as of April 1.

While vaccinations are readily available on weekends and after works hours, the state already gives employees a full workday, 7.5 hours, off with pay to get the shot.

Pennsylvania’s Treasury Department has estimated the plan will cost more than $100 million.

As of Oct. 31, in Pennsylvania, 78 percent of the population has had at least one vaccine dose and 60 percent are fully vaccinated, according to the Center for Disease Control.

In August, Wolf announced that all state employees would have to be vaccinated or get weekly testing for COVID-19 to remain employed with the state.

In response to the plan, Pennsylvania House Majority Leader Kerry Benninghoff, a Republican, issued a statement.

“The Wolf administration’s plan to charge taxpayers an estimated $100 million to give most state employees cash payments or a paid week-long COVID vaccine holiday is not only fiscally irresponsible but is tone-deaf,” Benninghoff said. “The same administration that, without notice, permanently ended thousands of Pennsylvania jobs and shuttered mom-and-pop stores across the commonwealth with its ill-advised and overbroad economic shutdown is now forcing many of those same individuals to finance this week-long paid vacation or cash payouts for the governor’s employees who received a COVID-19 vaccination.”

Indeed, the food inspectors who closed restaurants, Health Department employees who crafted pandemic policy, and Pennsylvania Department of Community and Economic Development workers who decided which businesses would be closed but who continued earning pay throughout the pandemic will be among those who get a week off; along with the many state employees who have been largely working from home since the pandemic began.

“Pennsylvania taxpayers deserve better and those who have suffered financial devastation as a result of this administration’s destructive unilateral action are due an explanation as to why they are struggling to make ends meet while funding additional vacation time for the governor’s employees,” Benninghoff said.

In addition to the common holidays such as Christmas and July Fourth, Commonwealth of Pennsylvania employees also routinely get paid time off for the day after Thanksgiving, Columbus Day, President’s Day, Martin Luther King Day, Veterans Day, and as of 2019, Juneteenth.

“This modified enforcement model for car stops furthers the Department’s priority of addressing the issue of racial disparity in the Department’s investigative stops and complements the Department’s efforts to address these same issues in pedestrian stops. As many know, the PPD has agreed proactively to implement several pilot programs with the goal of reducing racial disparity in these stops. Equally important, we worked with Council to develop programs that still allow the Department to address crime and disorder, but in a modified manner, thereby, balancing public safety with disparity mitigation efforts. We believe these two goals are not mutually exclusive but can work together to keep our community safe while also safeguarding the constitutional rights of community members. We also believe this approach will help to strengthen the relationships with communities we serve.”