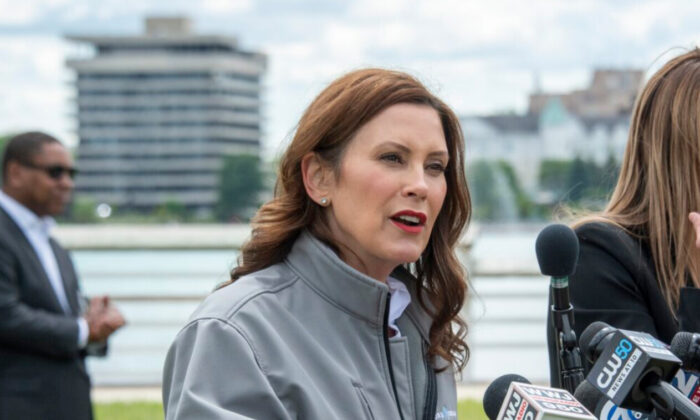 Republicans say the bills aimed to solidify election day training, protect machines from being hacked, and would have created more voting locations.

“This is just the latest example of Gretchen Whitmer’s politics getting in the way of actually governing,” Executive Director for Michigan Rising Action Eric Ventimiglia said in a statement. “This veto shows that Whitmer is more concerned with politics than the people they represent. If this package had four Democrat sponsors, she would hold a press conference calling it an achievement in voters rights.”

“Gretchen Whitmer vetoed common sense bills that would have made it easier to vote and harder to cheat,” Sachs said in a statement. “She blocked reforms that would have helped senior citizens cast their ballots, and legislation that would have protected both the state’s voter file and voters’ ballots on Election Day. Whitmer’s vetoes are a chilling attack on election integrity in Michigan.”

The Michigan Bureau of Elections released its report on the 250 post-election audits conducted across the state, affirming the accuracy and integrity of Michigan’s November 2020 election. Officials also conducted a statewide audit exercise, by hand-counting votes cast for president on more than 18,000 ballots randomly selected across the state, which affirmed the outcome of the presidential election. And judges appointed by both Republicans and Democrats rejected more than 60 lawsuits challenging the outcome.

Whitmer’s veto letter says House Bill (HB) 4492 would have complicated locating polling locations in senior living facilities and large apartment complexes. The letter said HB 4837 incorrectly implies that third parties have access to the Qualified Voter File (QVF), while HB 4838 claims to prohibit the electronic poll book at each election precinct or absent voter (AV) counting board from internet connection after the polls open on election day and until the results have been tabulated for that precinct and transmitted to the appropriate clerk.

Some people, including former Sen. Patrick Colbeck, have claimed the electronic poll book was connected to the internet in some Michigan precincts in the 2020 presidential election. Whitmer says no such defect exists and the bills address a non-existent problem.

Whitmer vetoed HB 4528 about election challenger training. She said it is worth further consideration but was an unfunded mandate.

“I will always protect our civil rights and stand up for our democracy that countless Americans have fought to preserve,” Whitmer said in a statement. “That’s why I vetoed legislation that would have perpetuated the ‘Big Lie’ or made it harder for Michiganders to vote. Right now, Michigan Republicans are participating in a coordinated, national attack on voting rights that is designed to undermine confidence in our election system and systematically disenfranchise Black voters, communities of color, older voters, and college students. I will have no part in any effort that grants an ounce of credence to this deception, so harmful to our democracy.”