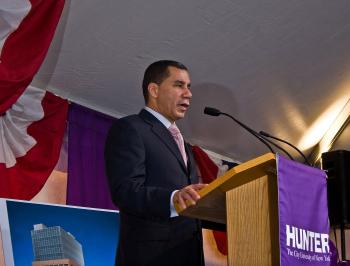 Gov. David Paterson at a groundbreaking ceremony for a new facility for Hunter College and CUNY on Monday Nov. 16 in East Harlem. (The Epoch Times)
US

The Hunter School of Social Work has been housed in a facility on East 79th St. provided by the Silberman’s, rent free, for the past 40 years. The new building will be named in honor of the Silberman’s $30 million contribution to the project, which will is also being funded by the state legislature with $101.3 million.

The new eight story, 147,000 sq. ft. green building will include an auditorium, library, café, and state-of the-art technology, in addition to classrooms and faculty offices.