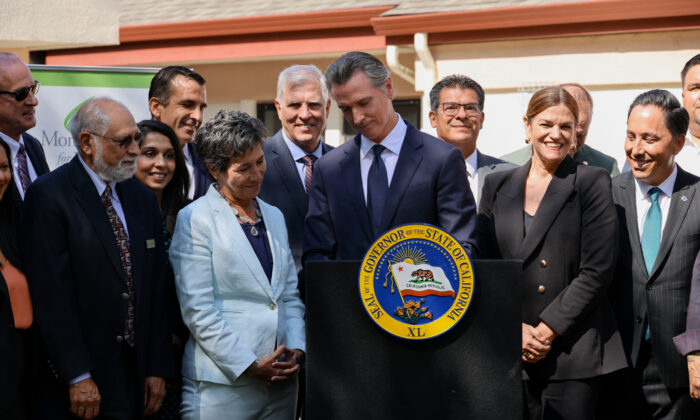 “With folks that are struggling with [being on the] schizophrenia spectrum, with psychosis disorders, they need help, they need intervention,” Newsom said during a Sept. 16 press conference. “Sometimes that’s tough. [The CARE Court program] is a balanced approach to refer [patients], to evaluate [their conditions], to create a care plan [and] due process, and to ultimately enjoy success.”

Senate Bill 1338, authored by Sens. Thomas Umberg (D-Santa Ana) and Susan Talamantes Eggman (D-Stockton), received bipartisan support from state legislators at the end of August before it was sent to the governor’s desk.

“The crisis is playing out on our streets and Californians want an answer to the crisis of conscience we all feel when we see this suffering firsthand,” Eggman said during the press conference.

To qualify for the program, individuals referred by family or peers must be over the age of 18, suffering from a mental illness or other psychotic disorder apparent in the Diagnostic and Statistical Manual of Mental Disorders—a mental health evaluation guideline created by the American Psychiatric Association.

Those who are suffering from substance abuse can be referred to the program as well.

Through a civil court evaluation, individuals deemed unable to make decisions for themselves will be covered by a one-year crisis intervention program, with extensions for an additional year available. The program can provide short-term stabilization medications, recovery support, and connection with social services and housing.

Court-ordered stabilization medications—antipsychotic drugs that can reduce symptoms of hallucinations, delusions, and disorganized thinking, according to the bill text—cannot be forcibly administered when a patient fails to cooperate.

Individuals must also meet other criteria to prove their inability to function on their own in order to qualify for the program.

The bill requires the Counties of Glenn, Orange, Riverside, San Diego, Stanislaus, and Tuolumne and the City and County of San Francisco to implement the program beginning Oct. 1, 2023—and the remaining counties should start no later than Dec. 1, 2024.

Courts can fine local governments up to $1,000 a day for non-compliance after the December 2024 deadline.

The program is supported by the state’s $15.3 billion in funding to tackle homelessness and $11.6 billion annually in mental health services, according to the governor’s office.

The move comes as California has been struggling with its sprawling homelessness, as more than 160,000 people are homeless according to the 2020 count as reported by the state’s Continuums of Care.

This year, Newsom allocated an extra $2 billion on top of last year’s $12 billion budget to provide additional housing for the homeless.

Regarding the mental health aspect of the homeless problem, Newsom said officials have been “playing in the margins” and have made modest reforms, like Laura’s Law—which requires each county to offer court-ordered mental health treatment for those suffering from serious mental illness but only when the illness leads to psychiatric hospitalization, incarceration, or violent behavior.

The law was amended in 2020 to make it mandatory for county governments unless they pass a resolution to opt out, but it is still less inclusive due to its stricter criteria.

“We changed the paradigm by creating a brand new approach, not reforming the old system, [but] designing a new system,” Newsom said.

“The creation of CARE Courts by SB 1338 represents a thoughtful approach to addressing the behavioral health crisis we are witnessing on our streets and getting people connected with the care they need earlier,” officials from the City and County of San Diego wrote, as quoted by an Aug. 25 senate floor bill analysis. “It appropriately recognizes the continuum of care that this small but highly visible segment of the population with significant mental health disorders deserve.”

“CARE Court expands an already problematic system into a framework of coerced, court-ordered mental health treatment that goes back to the country’s horrific history of ableism and subjecting disabled people to being a separate class,” the Disability Rights California’s Sept. 14 statement read.