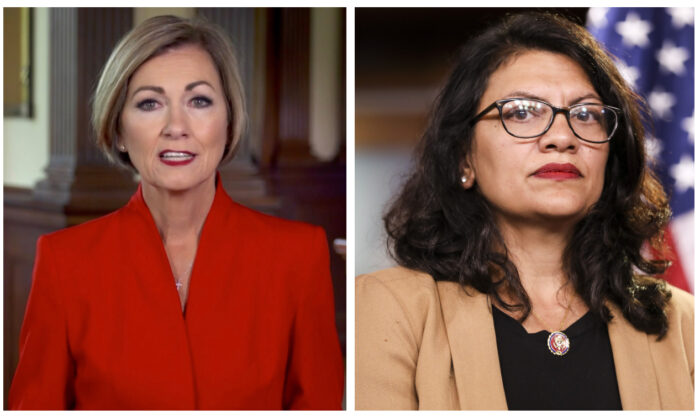 Gov. Kim Reynolds, Rep. Tlaib to Respond to Biden State of the Union

The GOP has unveiled that Kim Reynolds, the relatively unknown governor of Iowa, will deliver the Republican response to President Joe Biden’s upcoming State of the Union address while Rep. Rashida Tlaib (D-Mich.) will deliver a left-wing progressive response for the Working Families party.

Biden is scheduled to give his annual State of the Union address to Congress on March 1.

On Tuesday, after much speculation about who the GOP would pick to give the response, Republicans chose Kim Reynolds, who has until this point had fairly little attention on the national stage.

Ronna McDaniel, chairwoman of the Republican National Committee, applauded the selection of Reynolds in a statement.

“Governor Reynolds and GOP governors are showing how Republican policies work for all Americans,” she added.

Controversies over the proper government response to the CCP virus have divided Democrats and Republicans nearly since the pandemic began, and Reynolds is likely to contrast her own CCP virus response with Biden’s.

In September, Biden announced that he would mandate vaccination for all military servicemembers, federal employees, healthcare workers, and private sector employees at firms with more than 100 people employed.

Republicans loudly protested against these mandates—particularly the private sector mandates, saying that Americans should be free to make their own healthcare decisions. GOP governors and attorneys general across the nation vowed to fight the mandate, and critics of the policy made repeated attempts to get it overturned in the federal court system.

In January, the Supreme Court agreed that the private sector mandate was unconstitutional, overturning it in a 6-3 decision.

However, many of Biden’s mandates—including the federal, healthcare, and military vaccine mandates, as well as a mandate for truckers crossing international lines into the U.S.—remain in place.

In Iowa, by contrast, Reynolds has largely left the decision to wear a mask or get vaccinated up to residents.

In February 2021, Reynolds rolled back all face mask requirements for indoor areas. Later, this rollback was extended to public schools after Reynolds signed a bill prohibiting school districts from requiring that children wear masks.

In May 2021, she went a step further, signing a law making it illegal for businesses and local governments to require proof of vaccination—a law similar to many others that have been passed in GOP-controlled state houses around the country.

Reynolds’ response will likely focus on ongoing supply chain issues, skyrocketing inflation, and ever-increasing prices for gas and other essentials.

Republicans have blamed Biden for these issues, saying that Biden’s mandates and his party’s “out-of-control spending” and “anti-American energy policies” are in part to blame for supply chain shortages, inflation, and increasing energy prices.

In addition, Reynolds will likely touch on issues related to crime and border security.

Currently, cities across the United States are experiencing a nearly-unprecedented crime wave, with many major cities having reached record levels of murders in their jurisdictions.

Republicans have argued that these issues are caused by Democrats “soft on crime” attitudes toward law enforcement and by the proliferation of slogans like “defund the police.”

She will also likely discuss the crisis at the southern border, which has seen record levels of illegal immigration since Biden took office.

Americans living in border towns have reported harrowing accounts of the consequences of this unprecedented influx.

Border patrol has said that they are swamped, and are unable to keep up with the inflow of illegal aliens due to limited resources.

Biden and Vice President Kamala Harris have been accused by Republicans of ignoring the situation. Though he has been in office for over a year now, Biden has not made an official visit to the southern border; Harris briefly visited the border in June 2021, but she has not been back since.

Many Republicans have demanded a return to Trump-era immigration policies, which saw the lowest levels of illegal immigration in decades. Biden, who campaigned on a far more relaxed attitude toward border security, has been unwilling to accede to these demands.

On the other side of the ideological spectrum, Rep. Rashida Tlaib, a well-known member of “the Squad”—a coalition of several young progressives including prominent figures like Rep. Alexandria Ocasio-Cortez (D-N.Y.)—will give the response for the Working Families Party, despite technically being a member of Biden’s party.

“It’s an honor to deliver the Working Families Party response to President Biden’s State of the Union, and I am especially excited to elevate the voices of the working-class residents in my district and across the nation,” Tlaib said in a statement.

“It should not be this hard to deliver on healthcare, climate, housing, child care, safety, voting rights, clean water and so much more,” Tlaib added, in a clear reference to the failure of Biden’s $1.85 trillion Build Back Better social spending package (BBB). “Democrats are in the majority and must set a new course that moves with a sense of urgency. Our communities deserve for us to act now.”

Progressives became frustrated with Democrat leaders after the BBB failed to pass Congress.

While progressives had sweeping visions of making broad changes to federal social and economic policy once they found their party in control of Congress and the White House, these hopes have not come to fruition.

Tlaib’s response to Biden, her statement indicates, will likely air progressive frustration with leadership over their failure to pass expansive new legislation.

In the late summer and early fall of 2021, House progressives tried to force the passage of the BBB, which was originally a $3.5 trillion bill, by refusing to pass the $1.2 trillion infrastructure bill before the BBB was passed and signed into law.

After weeks of this stalemate, Manchin broke the will of progressives by telling them that their “political games [wouldn’t] work.”

Progressives hesitantly accepted the situation and, aside from a few holdouts, most House progressives voted with their party and with a handful of Republicans to pass the infrastructure bill. But the BBB, as progressives feared, remained in congressional limbo in the evenly-divided Senate, where Joe Manchin remained outspokenly critical of the bill.

Finally, Manchin announced that he would not support the bill under any circumstance over concerns about rising inflation, effectively killing the legislation.

The failure of the BBB was a tough blow for progressives, who have blamed Democrat leaders for allowing the infrastructure bill to pass separately from the social spending package. Many have still not recovered from the shock of that failure.

Now, as congressional Democrats prepare for a tough midterm battle, the party will have even less time to focus on the policies that progressives consider necessary, and Tlaib’s response to Biden will likely take the form of a call to action before midterm season gets well and truly underway.