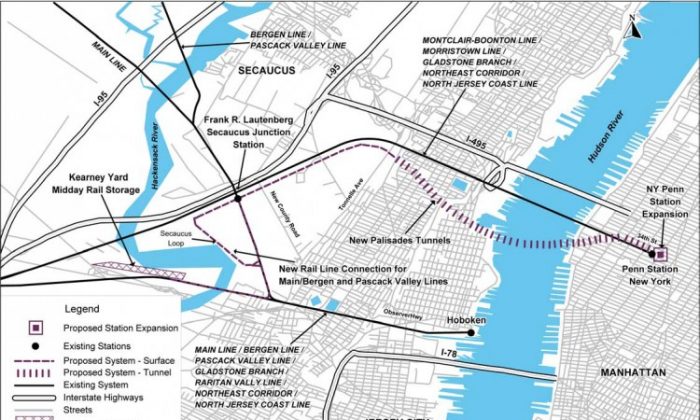 NEW YORK—A tunnel planned from New Jersey to Penn Station, known as Access to the Region’s Core (ARC), would have been the biggest transportation project in the nation. Yet it was terminated in October last year by New Jersey Gov. Chris Christie on behalf of the project executive committee in the name of budget discipline.

After more than a year of talking to major stakeholders and transportation groups, the United States Government Accountability Office (GAO) released a new report on Tuesday finding that numbers put forth by Gov. Christie’s office at the time of termination were inaccurate.

New Jersey Sen. Frank R. Lautenberg, who commissioned the report, said, “The most important transportation project of our time … was sacrificed for the short-term political needs of the governor.”

Lautenberg was echoed by nonprofit Tri-State Transportation Campaign, which called on the governor ‘to explain how he plans to improve the commutes of delayed transit riders and drivers stuck in traffic.”

The report also analyzed potential economic benefits and highlighted how much the region’s transportation infrastructure will be stressed without the new tunnel and trains.

Conceptions for the ARC tunnel began in 1995, and developed after 2003 with an environmental impact review and planning studies. The tunnel would have supported a much-needed increase of trains from New Jersey to Manhattan, such as more than doubling the peak-hour (7:30 a.m. to 8:30 a.m.) trains from 23 to 48. Trans-Hudson travel could increase from about 555,000 riders in 2005 to 760,000 rider in 2030, according to the report.

About 59,9000 jobs directly onsite and regional employment of about 98,300 would have been created with the new tunnel, according to the report.

After Gov. Christie was elected, he confirmed his support in a letter in April 2010. In October, however, he accepted the recommendation of the project committee, which pushed for termination after a 30-day review.

“I have made a pledge to the people of New Jersey that on my watch I will not allow taxpayers to fund projects that run over budget with no clear way of how these costs will be paid for,” stated Christie at the time, according to a release.

Christie said that federal funds were capped at $3 billion.

However, the new report finds that, in addition to $3 billion, $1.3 billion from federal highway funds was part of the proposed funding. Another $130 million would have come from economic recovery funds. This would have equaled a little more than 50 percent if the project stayed at the baseline estimate of $8.7 billion.

New Jersey Assembly leader Jon Bramnick defended Gov. Christie in a statement on Tuesday, saying the project would have been “too expensive a burden for New Jersey taxpayers to bear.”

Revenue from higher tolls would have been part of the funding.

Rising cost estimates are another reason Christie cited for shutting the project down.

The report admits that cost increases are expected on such projects. In one example, early in the project, Port Authority officials learned that no Penn Station surveys existed. The cost of a station survey was then added. Contractor competition, changes in the scope of the project, and backup for risks are among other factors that can contribute to rising costs.

“FTA’s 2010 Risk Assessment contained the next estimated cost—as high as $13.7 billion—as the engineers developed a more accurate understanding of what the project entailed,” states the report. This assessment was revised to a range of $9.5 billion to $12.4. New Jersey Transit had lower figures in 2010—$8.7 billion to $10 billion.

The FTA and New Jersey Transit began going back and forth over four years with cost estimates, beginning with $7.4 billion in preliminary projected costs in 2006 and 2007. The readjusted numbers included delays in awarding project contractors, and potentially high construction and other work costs.

A statement from Christie’s office pointed to the large fluctuations in cost as a sign that New Jersey could end up having to pay more than it bargained for.

“It’s clear now more than ever that the federal government has no clue what the actual cost of the tunnel would have been and Gov. Christie was right not to leave the taxpayers of New Jersey on the hook for indefinite cost overruns,” reads the statement.

The FTA and New Jersey officials have already fought over who would pay for the $271 million that the FTA initially spent during the project’s beginnings. An agreement reached in September required New Jersey to reimburse the federal government $95 million and spend the difference ($176 million) on transit-related projects.

Two other options for transportation across the Hudson are unclear at the moment. Extending the No. 7 train to Secaucus was recently shot down by MTA Chairman Joseph Lhota. He did express support for the Gateway Project, as has Gov. Christie and Federal Department of Transportation Secretary Ray LaHood. The Gateway Project, currently in a preconstruction phase and without sources of funding, proposes adding a new building just south of Penn Station and creating a tunnel connecting New Jersey to it.