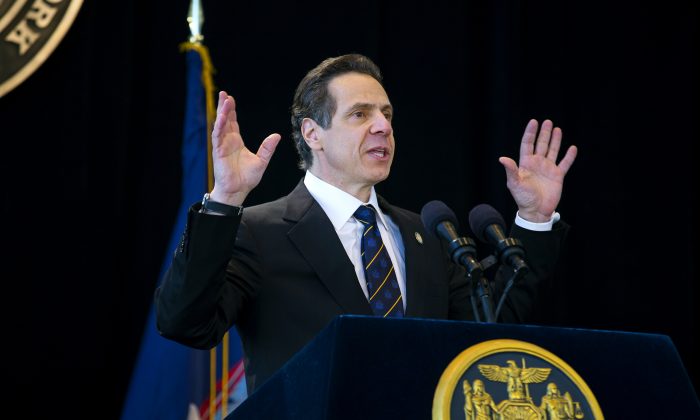 New York Gov. Andrew Cuomo speaks during an inaugural address at One World Trade Center in New York, Thursday, Jan. 1, 2015. Cuomo kicked off his second term as governor Thursday with a pep talk, urging New Yorkers to lead by example through some of the nation's worst problems. (AP Photo/Craig Ruttle, Pool)
New York

NEW YORK—Andrew Cuomo was sworn in as Governor of the State of New York for his second termin New York City the first of January. In his inauguration speech, he highlighted his progressive economic development goals.

“You knock us down, we get up twice as tall,” Cuomo said. “This is a uniquely New York moment, because when things are at their worst, we are at our best.”

“Four years ago when I took office … New York was a very different state and we were facing daunting challenges,” Cuomo said. “We made the government work. We restored the private sector jobs … this state has more jobs than ever before.”

Cuomo defeated Westchester County executive Rob Astorino in November to win a second term. Former lieutenant governor Robert Duffy, who did not run for a second term, emceed the inauguration.

Cuomo said the economic success in Buffalo must be replicated across the rest of the state. The governor mentioned raising the minimum wage, stopping juvenile incarceration, stopping domestic violence, lessening the tax burden on low-income families, and ethics reform.

“Americans are disheartened by the economic climate and rightly so … we work harder and we earn less,” Cuomo said. “While American capitalism never guaranteed success it did guarantee opportunity.”

Public education, which was supposed to be the great equalizer, Cuomo said, has become the great discriminator.

Cuomo noted new challenges that will need more attention in public health and safety, like hurricanes and seven-feet of snow, ebola, and terrorism threats.

He also brought up the issues of police accountability that have been put under a spotlight due to recent protests.

“The justice system does need to be reviewed,” Cuomo said, adding that there needs to be respect on both sides. He added he felt responsible to provide reforms.

When people question the justice system, they are questioning the democratic system we believe in, Cuomo said. It demands change, he said. “You will never solve a problem you cannot admit.”

“We can make the changes we need to make,” Cuomo said. “We have always taken on the big challenges, taken them on first, gotten them done, and created an example for the rest of the nation.”

Lieutenant Governor Kathy Hochul was sworn in at the inauguration and gave a speech aligning herself with the governor’s vision of being socially progressive but fiscally sound.

“Today we challenge ourselves to do even more,” Hochul said in a speech she gave before Cuomo spoke. A measure of success when we look back four years from now won’t just be how many more jobs are created, Hochul said, but signs of equity across race and income level measured in jobs and education.

At 4 p.m., Cuomo will deliver an inauguration speech in Buffalo.