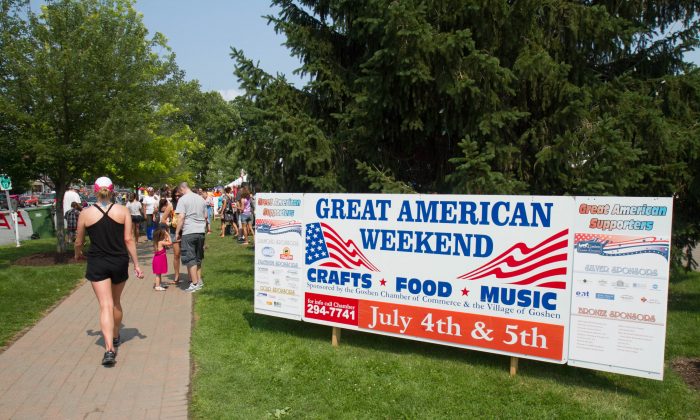 Goshen, N.Y.—Goshen’s 34th annual Great American Weekend benefitted from sun on Sunday, July 5, but even Independence Day’s rain didn’t deter some diehards from coming out to watch the races, shop at the vendor stalls, listen to the music, and enjoy the food.

“Even yesterday in the rain we had hundreds of people,” said Goshen Mayor Kyle Roddey who was there both days.

Every year the two-day Independence Day celebration gains a little more recognition, said 25-year organizer Ray Quattrini, and this year was no exception.

“As the event has gotten bigger, the sponsorship of the different organizations—they see the benefit of it. Ten years ago we used to be at about $10,000-$15,000 and now we’re approaching $30,000 in sponsorship.”

As the event has gotten bigger, the sponsorship of the different organizations—they see the benefit of it.
— Ray Quattrinni, Co-Chair, the Goshen Chamber of Commerce

The weekend is one of the main fundraisers for the Goshen Chamber of Commerce Chamber (GCC), which represents over 100 businesses in the greater Goshen area, and organizes the event.

Quattrini, who is Co-chair of the GCC, said he doesn’t see it changing much except to “refine” it to make it more like a country fair.

“There really isn’t much to change except to tweak little areas,” he said.

Built around Goshen’s historic racetrack in 1981 to help it recover from the economic doldrums, the racetrack is a central part of the weekend, much like it is to Goshen.

“When it first started 34 years ago, there was a line of seven vendors in the entrance to the Goshen historic track. From there it just grew every year—one more, 10 more, 15 more,” said Quattrini.

It has now expanded to the sidewalk along Main Street, onto the lawn of the First Presbyterian Church, and beyond.

The number of events has also expanded with the years as well. This year there were musical performances, face painting, hay rides, a dunking tank, amusement park rides,  henna tattoos, raffles, pony rides, tours of the church, aerial silk acrobatics and much more.

Many of the vendors Epoch Times spoke with were happy with the turnout despite the rain on Saturday.

They came from all over the county, the state, and the country to get in on what Quattrini estimates is upwards of 25,000 people over the two-day event.

“The fair has been good, especially today [Sunday],” said Rayanne Rysinger, a photographer and musician who was selling her photographs and CDs.

The two-day festival had 163 vendors, a slight decrease from the year before because of a new layout the organizers used.

“We changed the layout because of the flow from last year,” said Terry Smallin, the Executive Director of the GCC and the main organizer. “The only thing we did is take down the merchants’ tent and spread them out throughout.”

Some vendors were unhappy because they were put in a different spot than years prior, making it harder for their returning customers to find them.

“This is the worst Goshen Fair we’ve had,” said Ginny West, the owner of My Father’s Kitchen, a business that sells preserves.

She has been selling at The Great American Weekend for 22 years and said her sales were about half what they were usually.

“The few [returning customers] that did find me are saying, ‘We looked all over, we walked the whole thing [to find you].”

Smallin said they try to accommodate each vendor’s request for their desired location as much as possible but invariably someone is dissatisfied.

“We can’t make everybody happy, even though we’d like to,” he said, adding they would be rethinking the layout for next year.