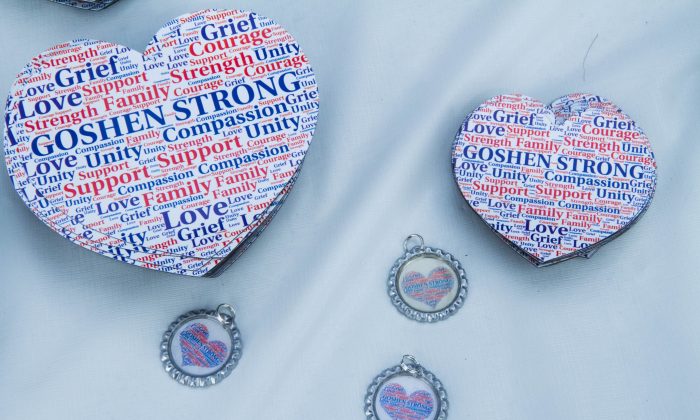 GOSHEN—A somber event brought 1,400 plus people to the heart of Goshen on Saturday for a sunny and festive gathering.

The Goshen Strong community picnic was held as a benefit for the families whose children were involved in an accident in July while doing drivers training.

Four Goshen high school students, all 16, and their instructor hit an oncoming tractor-trailer at an intersection in Warwick. Three of the teenagers, Antonio Baglivo, Lucas O’Connor, and Paul Vandoran succumbed to their injuries while the driver, Claudia Krebs, and the instructor were injured but survived.

The accident rippled out through the whole Goshen community and beyond. Everyone that Epoch Times spoke to at the picnic had a connection with the teenagers or their families, and those who didn’t said they came just because they wanted to support them.

“The community lost three beautiful people. And it’s hard,” said Rick Rhodes, a Goshen resident who said he didn’t know any of the teenagers. “This is Americana right here—people come together.”

Joe Betro, whose vision it was to have the picnic, said it was a way for the community to reach out to the families, as well as to help the community heal.

“I’m hoping that what we’ve done here today is heal some of the hearts and help with some of the financial burdens some of the families may be under,” he said.

The outpouring of support from the community was overwhelming, said Therese Urato, another organizer.

Set up on the lawn of the First Presbyterian Church were two stages, three tents of food, a desert tent, a drinks tent, face painting, hair braiding, kids games, a tricky tray tent, and much more—all donated by the community.

“People were calling us because they wanted to donate,” Urato said.

She and her husband, Michael Urato, along with Betro were the main organizers of the picnic. Therese is a substitute teacher in the Goshen high school and knew all the kids in the accident. Michael works as a chef at Delancey’s Bar and Restaurant in Goshen, which Betro owns.

They started the planning three weeks ago, and with the help of a steady group of volunteers and a lot of late nights, turned the church lawn into a mini version of the Great American Weekend.

Therese said she was surprised by the turnout—they had been planning for about 1,000 people. Betro said the fact that so many more came wasn’t surprising.

“I’ve been in the community a long time and I know what the community is like,” he said. “A lot of giving, a lot of open hearts.”

And while the picnic was held for the families, only one of the four families came, Therese said.

When asked if Goshen Strong, a term coined after the accident, would live on after the picnic, she said she wasn’t planning any more events.

“People come together when they need to,” she said.