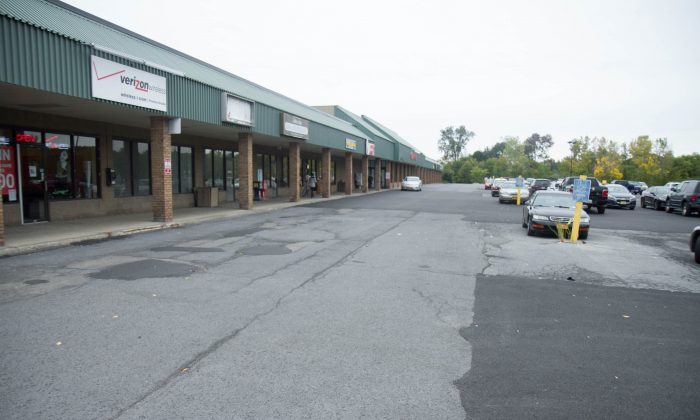 The Goshen Plaza off of Clowes Ave. in Goshen on Oct. 2, 2015. (Holly Kellum/Epoch Times)
New York

Repaves part of parking lot in the meantime
By Holly Kellum

Philip Adler of North American Properties is still in talks with different supermarket chains to fill the grocery store-void in the community of Goshen.

“We’re talking to probably close to a dozen different grocers right now,” he said in a phone interview.

The area hasn’t had a grocery store since Grand Union left 14 years ago, so when Adler closed on it in July, he promised to bring one in.

“[It] is at the top of everyone’s list,” he acknowledged.

His current plan is to redesign the plaza to face from Clowes Ave. to Matthews St. where there is more traffic. They have a site plan for 100,000 square feet of building space, almost double what has been built, although it may not be built all at once, he said.

The key is getting a grocer signed up and then the rest of the building plans will move from there.

He said the number of units and the design of the buildings will depend largely on the tenants, so he couldn’t give an estimate as to how many will be there, but he did say he was looking at larger companies to compliment the “smaller neighborhood tenants” that are already there.

As many in the community have noticed, a portion of the parking lot was recently repaved to fix some of the craterous potholes that the community has been complaining about for years.

“We tried to address the worst areas of the parking lot and the potholes,” he said noting that it was the area closest to the shops that had been repaved.

He said they did about 25,000 square feet and do not have any plans to do the rest, but “if the need arises, then we’ll do more work.”

He said they plan to submit the site plan to the planning board by the end of the year.