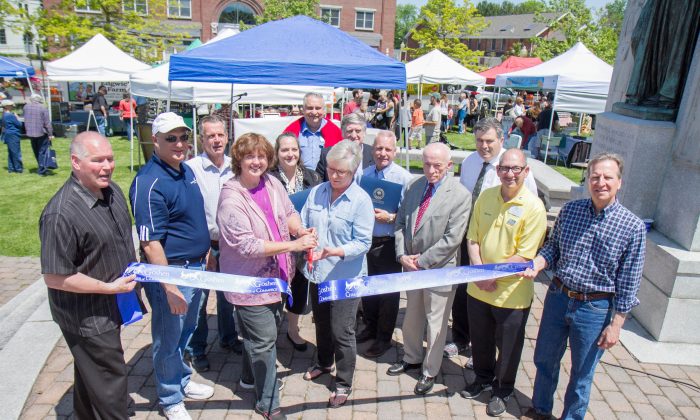 GOSHEN—Parking around the village green was hard to come by on Friday, May 20 as the Goshen Farmers Market kicked off its 24th year.

Like last year, the market has 31 vendors, with some vendors rotating with other vendors throughout the month to be able to sell at the popular market.

Co-organizer Diana Lupinski said there will be a schedule of the different vendors in the information booth at the front so people know what vendors will be coming which weeks.

There were 55 applicants for the market, she said, but because of space limitations they had to be selective.

“We try to keep it competitive for everybody so they’re not all selling the same kinds of things,” she said. “I have a cookie person, I have a cupcake person, I’ve got a pie person and they don’t cross over each other.”

On opening day there was everything from jewelry and accessories to pesto and plants on offer.

There are concerts scheduled throughout the season, and on June 3 there will be a collaboration with the Goshen Art League.

The League will be part of the farmer’s market during the day and afterwards move to West Main Street from 6:00 p.m. to 10:30 p.m. where they will be shutting down the street between Railroad Avenue and Church Street to hold a concert in conjunction with their First Friday Art Walk. Instead of the art walk being in local businesses as it usually is, it will be outside under tents. The event also marks the return of the Illuminate Goshen lights strung over West Main Street, according to a Village press release.

“This is Americana,” said Goshen Town Supervisor Doug Bloomfield at the ribbon cutting ceremony for the farmers market. “What you see here today is free enterprise where people can shop for what they want, when they need it—and it’s fresh.”

John King, a co-owner of Royal Acres Farm in Wallkill, said this is consistently the best farmers market his family farm sells at that lasts throughout the summer. While Bethel Woods has more traffic, he said, that market is part of a festival that lasts only a few days in September.

“This market is very good. It’s one of the best markets in Orange County,” he said.

Lupinski said all the vendors are local to under 30 miles and everything is made or prepared by hand. “Nothing’s bought,” she said.

The market is a collaboration between the Goshen Chamber of Commerce and the Village, with the First Presbyterian Church donating their lawn for the weekly event.